OF CABLES AND FERRIES 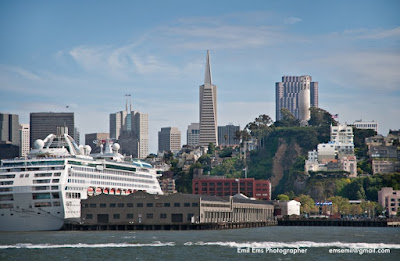 I don’t think you have seen such a view of San Francisco’s skyline before. It demands a safe hand and some disregard for your camera’s lens, taken as it is from a boat, speeding with abandon along San Francisco harbor and showering its passengers with salty spray. How on earth did I happen to be on this high-speeder?

You may recall the somewhat abrupt ending to the posting “Days of Milk and Honey”. After having wallowed in alternative life styles all morning of 22 May, I decided to make a full day out of my visit to SF and spend the afternoon like an ordinary tourist, but with a twist: I would be getting well acquainted with the cable car, a venerable institution of this town, but would investigate it on foot, following one of the lines from its beginning to its end. 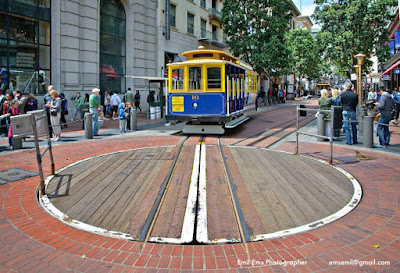 The SF cable cars are the dinosaurs among municipal traffic systems. The first line was established in 1873, when Stockholm still was trafficked by horse carriages and horse tramways, as I recall (steam tramways arrived in Stockholm first in 1987!). The cable cars had, from the outset, steam as power source. Driven by steam, cables ran, in a perpetual loop, under the streets and the car driver hooked the car on to it with a large claw. Although the 1906 earthquake ended most of the then prevalent lines, a few remained afterwards on the more hilly stretches. Three lines are still in existence, the relatively modern California Street line (without turntable), the Powell/Mason line and the Powell/Hyde line (the latter two with turntable). I judged the Powell/Hyde line to be the more exciting to follow, since it ended at the most popular stretch of the harbor and provided nice views of Alcatraz on its way.

Before starting our hike, let us briefly linger at the Powell Street Terminal of the two turntable car lines. This was a busy part of town, lying just below Union Square, but not as busy by far as the other terminal, down in the harbor, where hundreds of people usually queue for the cars. At Powell, it was relatively easy for me to advance sufficiently for a good view of the turntable and its operation. For the aficionados of public transport among you, I have a little treat in store: have a look at the shortish video below, by double clicking on the address. If this does not satisfy your cravings, I am sure that Youtube will be happy to oblige you with many more of the same kind.

After this promising start, up I climbed on Powell Street, from time to time being accompanied and outrun by these lovely antique vehicles. The climb was steep, as you can see from the pictures, and could stand comparison with the climbing I had to do in Sunol and Briones (see “The green, green Grass of Home” and “[Not so] Wuthering Heights”). Indeed, you can take many a serious hike in San Francisco, providing ample training for the worst in mountain trekking! 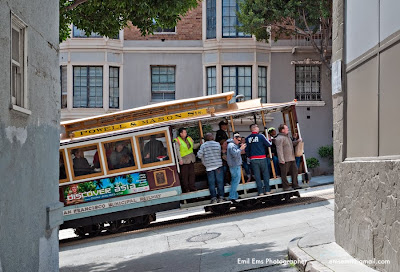 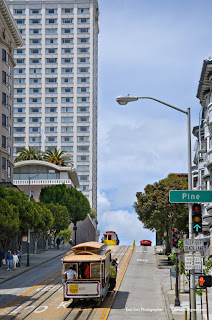 After some twenty minutes’ upward labors, the crest of the hill came in sight. Thereabouts you can find the famous crossing of the cable lines, with the California line coming from the right, on California Street, threatening to clash with the other two, more sedate, lines, on Powell. Once up on the crest, rewards await you. Down yonder a vista opens towards the Commercial Centre, with all the skyscrapers, not above, but rather below your highnesses. But that is not all: harken, you lovers of fancy hotels, for to your right opens up a courtyard leading to the quintessence of elegant abodes, that of the Clark Hopkins International. 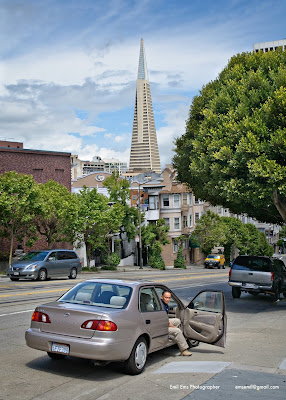 Not wishing to descend too soon from these lofty heights, I decided to follow California Street towards the left for a while, instead of following my trusted cable cars, which anyways run on Jackson, parallel to California. This turned out to be a lucky streak, for barely had I walked a block than what looked like Notre Dame de Paris, in diminished form, rose its lofty towers. It dawned on me that I now was on the top of Nob Hill, one of the more fashionable neighborhoods of Frisco, with the Pacific Club sitting, like a brooding dark giant in brown granite, on the block opposite the park adorning the more graciously looking cathedral. I did not care for taking a picture of the club, so posh it is, concentrating on the ecclesiastical sight instead. 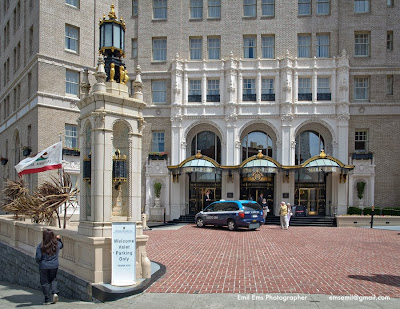 Although I had promised you to be a tourist among others that afternoon, I could not resist directing my thoughts to the famous novel “More Tales of the City” by Armistead Maupin. In it he tells the story of a strange cannibal cult, with its main place of sacrifice on a platform just above the altar of Grace Cathedral. Lest you loose your appetite, let me emphasize that the cult members do not kill anyone. Instead, they “borrow” body parts from the city morgue, and digest them concurrent with the priest officiating the Holy Communion at the altar below. It appears that the cult takes the words “this is my flesh and my blood” more seriously than does the ordained priest with his bleak oblates and watered-down wine. But, enough of these sordid evasions from the main thread! I trust you understand that I had no cravings to pay the church a thorough visit. 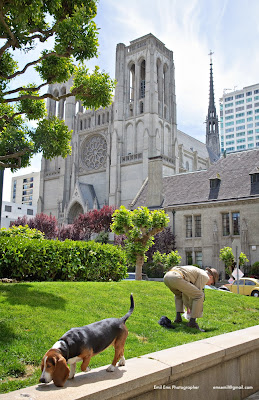 Instead I labored on and arrived soon at the final street of my hiking tour, Hyde Street, where I turned to the right and soon found my trusted cable cars again. From then on it was downhill all the way. The big reward for my troubles came several blocks later, at the second to last promontory on Hyde Street. There one gets a beautiful view of Alcatraz, with cable cars appearing from below as if out of thin air. At the same place, glancing to the right, one observes a huge queue of cars, waiting for entrance to Lombard Street, the “crookedest street in the world”. 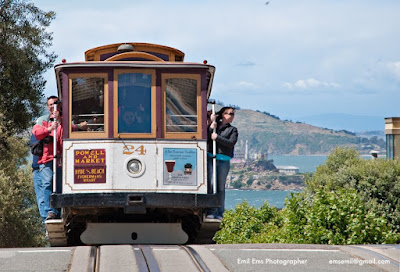 This was really the climax of the excursion. From then on things get progressively more bland, as you approach the harbor with all its tourist traps. So let us speed past these so called attractions, Ghirardelli Square, Fisherman’s Wharf, etc. etc. without delay, pausing maybe at one or the other more charming attraction, such as, the immovable wonderman with handheld super-shooter. 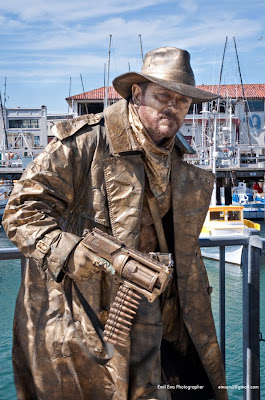 Why did I pursue the harbor tourist track at all? Well, it had occurred to me, whilst hiking the streets of San Francisco, that it might be charming to finish my journey with a leisurely ferry trip back to Berkeley, if such a traffic line existed. Unfortunately, it did not, but there was a ferry going to Oakland, which I did not hesitate to embark on, tired of the ruckus in the harbor. And so we are back to the beginning of this posting, with the boat driving at substantial speed from one harbor stop to the next, barely giving me time to take pictures of the SF skyline, as seen from the sea. 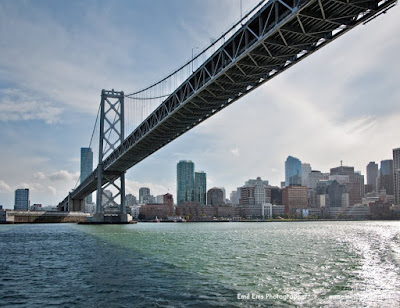 Soon we left the Frisco coast and speeded, in all haste, towards Oakland, providing interesting views of the enormous container harbor located at the East Bay. It was educative to compare the different philosophies in coast usage between San Francisco and Oakland. Whilst Frisco had priced commercial harbor transport out of existence, giving priority to the more profitable tourism services, Oakland had developed one of the largest container facilities on the West Coast. I counted, while speeding past, some hundred cranes adorning the Eastern seashore. Looking at the three cranes in the picture below gives you an inkling of the dimensions involved. 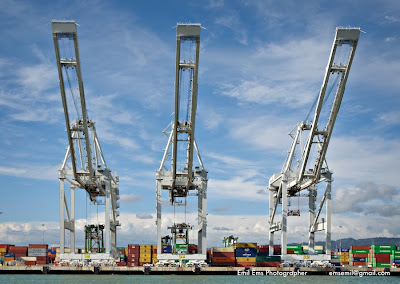 Once arrived in Oakland, I felt almost like being back home. Still, there was a fifteen minutes’ hike to the nearest BART station before the feeling turned into substance. When I asked for directions, I was met by solid disbelief: Could anyone in his right mind walk such an enormous distance. Why didn’t I use a cab? Little did they know that I had already three hours’ hike behind me and could certainly stand another little stretch of legs.

I am glad I did, since the short hike showed me Oakland’s downtown in a much more pleasant light than I remembered it. It turns out that former Governor Jerry Brown was the city’s Mayor until fairly recently and managed to attract considerable funds for the refurbishing of downtown. Unfortunately, he tired eventually of his mission. An unfortunate incident may have contributed to his languor: Whilst he was hosting a party on the lawns of his official residency downtown, a gang war suddenly erupted virtually under his noses, even if outside the gates, with several killings as a result. Soon thereafter, Jerry announced that he had had enough and is now aiming at becoming Governor of California again. It may be so that it is easier to engage on a mission to save California, than trying to rescue Oakland. As Governor in Sacramento, the gangs are not as close to the residency’s gates as they are in Oakland.

But even with Jerry gone, we still can enjoy the results of his missionary efforts. The downtown looks more clean and orderly, no more pawn shops, prostitutes and other ne’er-do-wells in sight. Let’s see how long this lasts without Jerry being around and throwing money at Oakland’s problems. 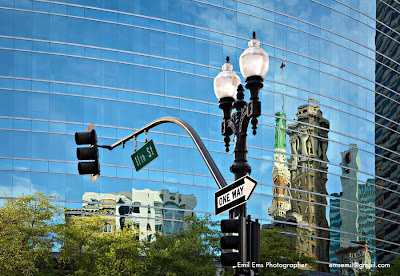 Let's round off this little essay by a last picture, showing the flashy escalators of Berkeley's BART station. Mounting this running staircase, you wind up smash in the centre of Berkeley, with Berkeley Square around the corner and the skyscraper, shown in an earlier post ("El Escorial ..."), just before your nose. 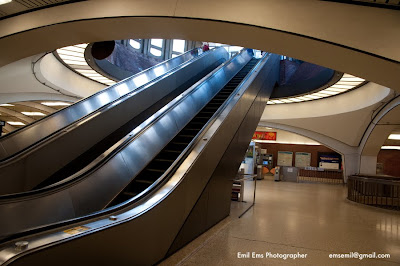