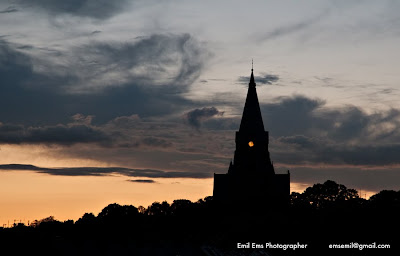 The picture you are looking at shows Sophia Church (Sofia Kyrka), just opposite, and due north of, my apartment in Stockholm. As you can see from the church clock, it is precisely midnight. I arrived back home, after 12 weeks of travel, on the evening of 22 June, just some twenty minutes before taking this photo. For you, dear readers, not familiar with Sweden and its peculiarities, you are witnessing the famous white night of the Nordic midsummer.


All was quiet on this blessed occasion. The sun had, of course, already set, but was ambling along, slowly but surely, just a wee bit below the horizon, keeping the northern sky full of light, against which the church tower stood as an enticing silhouette. Suddenly, birds started to twitter, as if being confused between dusk and dawn. And right they were in being confused, since dusk merged with dawn without an intermittent period of dark. Soon the zone of lightness would pass the church, getting more brilliant along its way until, an hour later, the first golden colours of the sun would start colouring its lower fringe, announcing the newly borne day.

It has been a looong trip this time and it was good to be back home again. But my joy at looking at the midnight wonders was mixed with sadness. What I had won in regaining the familiarity of Hammarby Sjöstad, I had lost in leaving Berkeley. For the first time in many years, I nurtured a sharp feeling of sorrow and longing, which had appeared already when mounting the plane in San Francisco, but now came to the fore with a vengeance. But should that surprise me? Had I not embarked on my last great adventure that now had come to its end, at long last?

Thinking back to the many weeks spent in California, it slowly started to dawn on me why I had so eagerly engaged in travelling there and staying there for a prolonged period. It was my subconscious that was responsible for that decision, my conscious self having scant to do with it! Way back in the seventies, when I staid in California as a young man, I was not ready for all the wonders to behold in that benighted region. Too engaged was I in my daily labours of taking courses, studying books, writing drafts of my thesis, to be able to take it all in, the marvellous things to see and to experience, which were literally to be found just under my nose. Still, my mind must have observed all this at the margin, and stored the information as a job unfinished, to be further looked into at a later time, if and when circumstances permitted. This is, I realize it now, what made me jump at the opportunity of going back!

But let us not delve too much into psychological intricacies! This blog has come to an end and it is time to acknowledge it. Let me put the finishing touches by thanking you, dear readers, for your patience and staying power, in following me through the incredible amount of 34 postings. A special “Thanks!” is due to Lars, Per Magnus and Kari, my most faithful and elaborate commentators, who kept me on my toes with their manifold ideas and suggestions; to Richard for letting Eva know about my trip; to Eva, for her cordial welcome, both in the SF Symphony and in Stanford; to Heidi, for gifting me invaluable advice to get the blog started and going; and, last but not least, to my good friends in Berkeley, Nobuko, Akiko and Edward, for taking me along to numerous excursions. Without you all, I am sure I would have tired of preparing further posts long time ago, maybe, already after the first three or four chapters.

As a last, and special, treat for all of you, I would invite you to join me, by double clicking on the address below, in paying a final tribute to this marvellous place that we visited together during all these weeks in spring 2010! 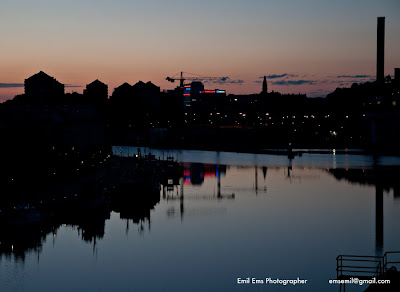 Dear Emil,
Many thanks for your entertaining blog posts and sunny pictures. Have a safe trip home,

Dear Emil,
Thank you very much for your blogs. I may not have read them all, but occasionally did so.
So, you have completed one project and there will certainly be more of them.

All the best to you,
Heikki

It was a real pleasure to read you and watch your photos!

When the next trip?

Dear Emil,
I hope this is not the end – but just the beginning of a long-lasting, nourishing memory of an unforgettable trip that you so kindly shared with us.

Thanks a great lot for the blogs and not too bad pictures :-) – and enjoy both memory and Scandinavian summers … winter and darkness are coming soon and too fast.

All the best and kind regards,
Günter

Welcome back! And enjoy the warm and welcoming weather. If this is Global Warming, I'm not sure I mind that much?

thanks for all the posts and photos. i especially enjoyed the photos, since i used to live in berkeley. i trust you had had a wonderful early summer in california. and good luck to your next destination!

Thank you Emil for sending your stories also to me.
I did not watch all of them. But I really enjoyed those I watched.
Thanks again !!!
José

Dear Emil,
Thank you for your blogging. Please keep us on your email list. We have enjoyed reading them and seeing your appropriately included and excellent photos.

Interesting experiences, some new to me, some cherished like Mediterraneum, of Berkeley, Thanks for the link to your blog and your encouraging words re: my blog. I will give it a try, maybe. Take care. I am always curious how anyone finds my blog. amazing to me, and someday I have to get to Stockholm. Monica Fletcher "Voyage of the Black Phoebe"

I was thrilled to find the reaction of such an accomplished hiker on my blog.

You wondered how I found your blog. If you look at the "Nimitz" Chapter (one of the early ones), you will find a recent comment by a Professor in Biology from UBC. This comment caused me to have a closer look on what other people had been writing about the Peace Grove in Tilden. In that context your blog came up on Google and I was charmed by your account of hiking through landscapes I had also visited.

If you would come to Stockholm one of these days, please make sure to let me know. I could show you some sights and we could exchange experiences of the East Bay, one of the most beautiful places on Earth.

To encourage you further in going on with your enticing blog of your hike, I am now planning to make a book out of my experiences. Why don't you think in those terms yourself and keep on the good work of documenting your adventures?