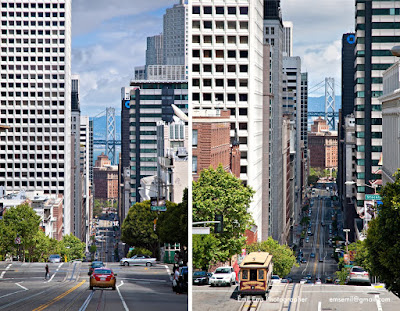 ”Yes”, you guessed right, I AM alluding to this fabulous love song by Jerome Kern, both sad and glad in one rich melodious envelope. Why on earth would I be interested in this special tune? And why just now, in the middle of my adventure tour in the Bay?


Well, I don’t keep a secret of having a past as musical performer, that is, as being part of the chorus in the Geneva Amateur Operatic Society, quite apart from having been leader of a jazz orchestra, sort of, in my high school days and a Member of the famous student choir Waltharia. So, whenever I find an intriguing article about musical or jazz composers in the newspapers, I start paying attention, rather than scanning diagonally, which I usually do with the papers nowadays, by right of age.

So it happened that a nice little note in the San Francisco Chronicle drew me to the fact that there exists in San Francisco a society devoted to restoring long gone, and often lost, musicals. It is a small company, not unlike my old Operatic Society, but clearly professional, both in planning performances and in quality of performance. "42nd Street Moon" is its name, referring to Broadway’s 42nd Street in its heydays. The Chronicle mentioned that the company was putting on stage Jerome Kern’s last musical, Very Warm for May, from 1939.


So, last Sunday off I went to San Francisco with a rented car, along by now well trodden paths, and arrived, well ahead of time, in the City’s commercial district, where Eureka Theatre awaited my presence on Jackson Street. It turned out that this was not far from California Street, so I managed to squeeze in some swaying shots of this steep street, upwards and downwards, and with and without the quintessential cable car, before the show began. You see two examples as title picture. The show itself could not be documented on camera, due to union rules.

It was pure pleasure to attend this performance. The theatre was small and intimate, and the performance was played completely without the now sadly common enhancement through loudspeakers, which gave the play an air of authenticity. Although the orchestra was represented by a lonely pianist, this artist’s performance let me soon forget his singularity.

I cannot say that the score was completely linear and rational. It appears that there was a surrealistic streak in the public arts of that time - think of Walt Disney’s Fantasia - and good old Jerome or, rather, his librettist Oscar Hammerstein, tried to weave that into the story. But “Oh!” the music, the music! It was Jerome at his most mature and sophisticated. Two of the songs, “In the Heart of the Dark” and “All the Things You Are” will live forever in the heart and mind of true music lovers. Amidst a rather spoofy scene in act one, suddenly, two soft voices started to sing the latter song, soon joined in by two more sophisticated ones and the quartet at once brought the story alive, not to speak of bringing tears to my eyes through the direct conduit of marvellous sounds to heart. Later I learned that I had heard, for the first time since maybe the ‘thirties, this one-of-a kind song in its ORIGINAL AND UNIQUE VOCAL ARRANGEMENT!

Among all the outstanding performers, I managed to notice at least three as especially interesting and touching. The first was a young lady, a bit maladroit and drawn back as personality, it seems to me, who managed, by overcoming her natural traits, to present a wonderful performance, making us believe the intricate world of a teenager, with vivid song, gestures and aura. The second, another young lady, had a truly well rounded voice, which pearled around the quartets she participated in and put true icing on the melodious cake. Finally, a more mature, but still young, gentleman played the role of gangster with a heart, and did so with “bravour”. Seeing him on stage was like seeing an improved version of Chaaz Palminteri, playing Cheech in Woody Allen’s film Bullets over Broadway. No doubt in my mind that Woody has borrowed his figure from Oscar’s score, which speaks in Woody’s favour for remembering this rare musical.

But above it all thrones Jerome, with his unforgettable music; it lives on, in particular the song cited in the blog title above, even if the musical in question is long forgotten. The tune has survived as one of the most revered in the standard repertoire of any modern jass ensemble worth its name, starting with the originator of modern jazz, Charlie Parker himself. Here comes a performance by the Master:
Contrast that performance to the original version, as conceived by the composer! Unfortunately, there does not exist any recording of the performance I had the privilege to witness. But I was able to locate on Youtube a rare staging that also shows the version as conceived by Jerome: you are in for a treat!
To sum up, here is another treat for you: Ken Levin, from 42nd Street Moon, has kindly sent me some pictures from the show. I like this one the most, where the wealthy Connecticut arts patroness "Winnie Spofford" (played by Maureen McVerry) is comforting the young spritely teenager "May" (Megan Hopp), who has run away from her dominant father and brother, hoping to become an actress, and crashed Winnie's theater group. David Allen is the valiant Photographer. 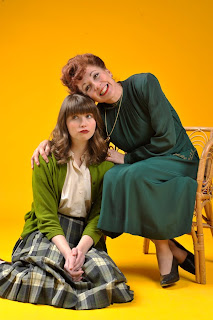 Emil,
As you will well know, the South Bay Area has been my normal short stay summer ground for the past 20 or so years. But in your few weeks there, in depth, I have learned a lot. On Sonoma and Napa I am perhaps just a little ahead, but on the rest
you are way ahead. But perhaps splurge on a lunch in Chez Panisse while you are nearby would be merited. It matches with the slow food places in Piemonte.
And you are not yet missing anything in F-1 :)
ken

I think the two young ladies you are speaking of are Megan Hopp who played the title role of May, and Chelsea Hollow who played the roll of Carroll (the Soprano in All the Things You Are). The Gentleman is a very gifted comedic actor named Peter Budinger, who has played a number of roles with 42nd Street Moon, all of them VERY different.

I'm glad you enjoyed our production and hope you'll be able to join us for more, whenever you are in town!

Dear Ken,
I am delighted to see an old friend from the Commission here on my blog; this is a first! Thanks a lot for your compliments that I will endeavor to live up to in my remaining blog postings. Actually, I already have visited Chez Panisse, upon the advice of another old friend.

Dear Klevin,
I would like to thank you for your help in identifying the actors I mentioned and also for the nice production photos you sent me. As you can see, one of them form now an integrated part of the posting. I am sorry to have to leave for Stockholm soon and thus won't be able to enjoy your future productions of Kern musicals.