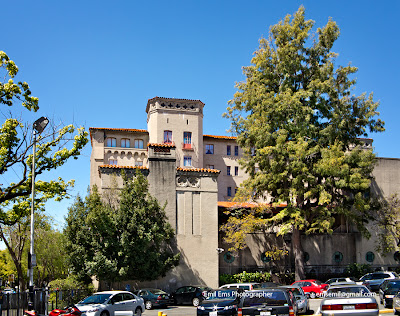 Once upon a time in California a girl was born, with a beautiful brain, both analytical and creative, its two halves in perfect harmony, so to speak. 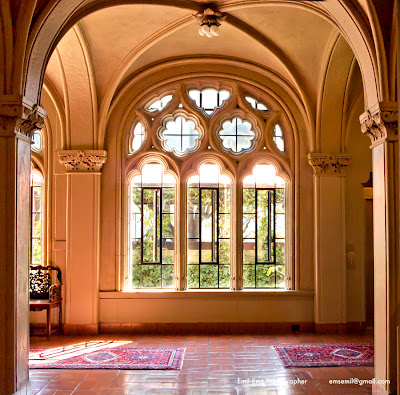 There was never any doubt that greatness would bless her. On her way, she embarked on some serious studies, taking an engineering degree at UC Berkeley at a time, when universities on the old continent still refused to accept the fairer sex in its institutions of high learning. This took care of sharpening the left half of her brain. 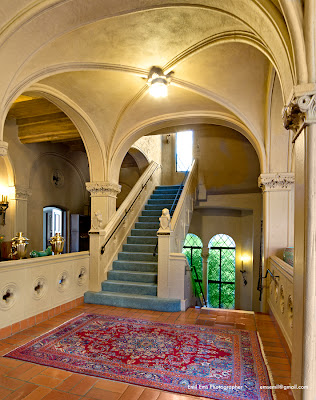 Not satisfied with a job half done, she set out to polish also the other half. Architecture appeared a suitable topic and what better place to study it than venturing to the capital of "La Belle Epoque" and applying for entry at the "Ecole des Beaux-Arts". Here came the first hurdle for her path to glory. The old continent categorically refused this young lady access to its foremost School of Arts. You and I would have returned home, stifled by this moth-eaten cloth of customs, but not this young lady. She produced a second application to the Ecole, a third, a forth ..., each consisting of a beautifully drafted and perfectly executed plan for a master building, a new one for every application. This went on for two years until, full of embarrassment, entrance was granted to her, but at a condition: she was to attend classes hidden behind a screen, so as not to embarrass and disturb the male students! 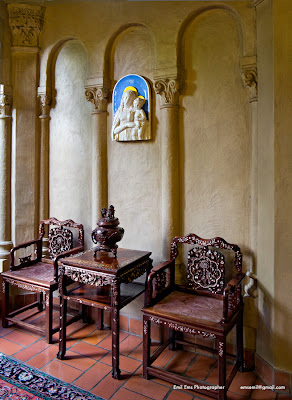 By now you certainly have guessed the name of this remarkable female: we are speaking of no other than Julia Morgan, one of the foremost architects in California at the beginning of last century and way into modern times. 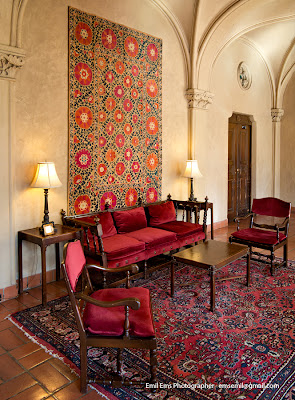 I have always been intrigued by this female master builder, ever since visiting San Simeon in the 'seventies and admiring the way in which she used bits and pieces of "lootings" from the old continent to create, like laying a puzzle, an impressive monument, more in honor of herself than that of her employer, Randolph Hearst, the great newspaper magnate and capitalist. 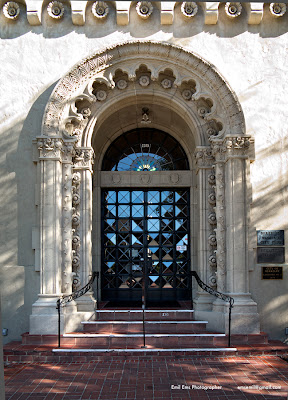 Two years ago, on my first voyage down memory lane, I happened upon an entrance door at Durant Street, that looked out of the ordinary, among the many churches that are adorning the sidewalks. I could not quite identify the architectural style: was it Romanesque, or maybe Venetian Gothic, or possibly Moorish? In fact it seemed to embody all three of those styles in one simple doorway. This must have been constructed by an architect well versed in the history of buildings, I thought. Getting closer, a sign indicated that I was standing before the Berkeley Women's City Club, build by Julia Morgan in 1929. 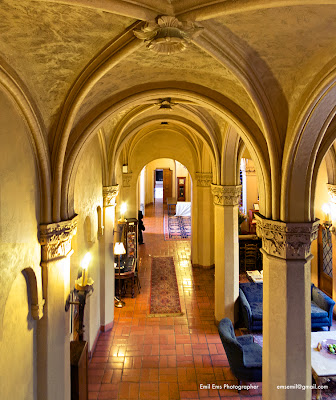 Happy to have found another specimen wrought by Julia, I sought and read some material on this building. Apparently, this was her first edifice since San Simeon, and she was happy to construct it fully in line with her own ideas, after having spent some years down south, forced to follow the intentions of her overpowering contractor. Her engineering background served her well, since the construction was finalized in the record time of two years. 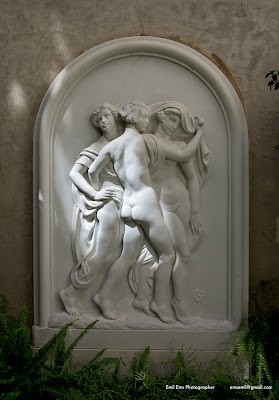 With these facts digested, I rushed back to the building to take some pictures of the interior, but it was not possible then to get access. The doors were firmly closed. As an aside, let me tell you a funky story that illustrates the charm of Berkeley. Short after this failed attempt to get access, I met a lady of a certain age at Peet's Coffee and Tea on Telegraph. She was of Persian descent and claimed to be a Member of the Club owning Julia's temple. She was all charm and promised me to provide access to the building's interior. Pleased about this generous offer, I invited her for  lunch at the best Persian restaurant in Berkeley. After a pleasant meal, spent in engaging conversations, she admitted, offering her elegant sympathy, that she had unfortunately no connections with the Club. As a consolation, she gave me a brochure about the building, which, as she put it, would be quite enough for me to get to know its interior. That was that as concerned my visit to Berkeley two years ago. 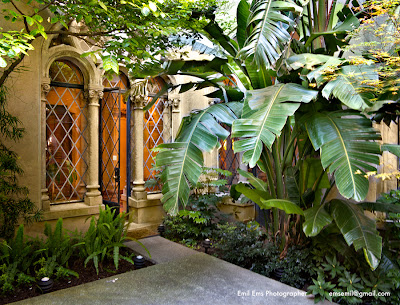 Three weeks ago I happened to pass by the same elaborate entrance once again. I am older now, and hopefully wiser, so I rang the bell, hoping for a positive response. To my surprise, the door opened for me and I was greeted by a charming young lady who turned out to be the manager of the premises. When she heard that I was a photographer, she was pleased to grant me access to the building and – bliss upon bliss – even invited me to lunch in the building's pleasant dining hall. What a difference two years make! 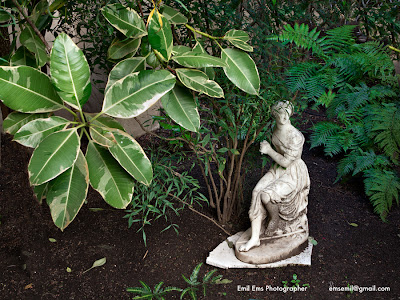 Thanks to Laura Bourret – the charming manager – I spent an engaging morning in Julia's Berkeley castle. Whilst walking through the premises I couldn't help comparing Julia's masterpiece with that of contemporary architects on our own continent. I lived in Brussels for ten years and am familiar with the edifices of the Belgian Art Nouveau architects, in particular their foremost representative, Victor Horta. Interestingly, whilst our European innovators used mostly cast iron as bearing building element, clothing them in colored glasses and elegant stone facades, Julia and her Californian compatriots built in a much more massive style, using concrete as main building element. As it has been explained to me, buildings such as wrought by Victor Horta would not be able to withstand the pressure of earth quakes, forcing native architects to find their own unique style. 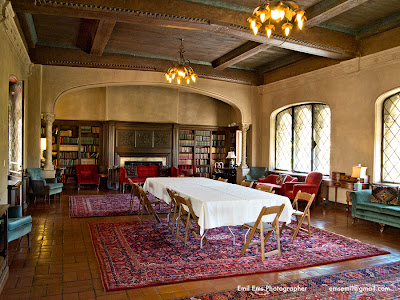 Julia turned out to be a master of building elegant mansions in concrete. Like her European counterparts, she put her pride in designing each building from outside in. Every little detail in the interior was conceived so as to harmonize with the whole. Even the roof decorations in the large salons of the Berkeley Club were carefully designed to be a perfect simulation of wooden roof beams, although being wrought in concrete as all the other details outside and inside the house. 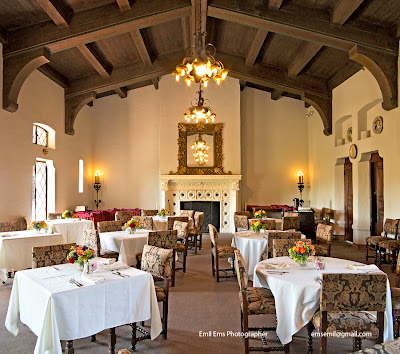 Although Julia was an innovator in the use of concrete as building material, she was surprisingly old-fashioned in her choice of architectural details. As already mentioned above concerning the details of the entrance doorway, windows, staircases, furnaces and other interior embellishments exhibit a curious mix of gothic monasterial, moorish and other historical styles. Could it be that Julia, having spent so much effort to enter the Académie des Beaux Arts, felt obliged to follow the teachings of that Architectural School, who was at her time still bonded to the building styles of yore, in the period of La Belle Epoque – Gründerzeit in Austria – when it was en vogue for architects to pick and choose from history in conceiving their own buildings? 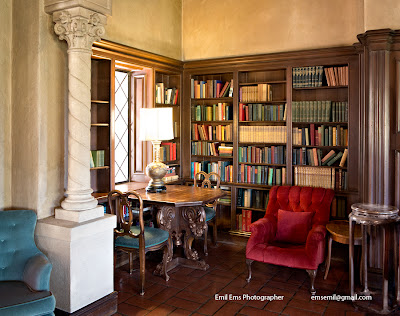 Be that as it may, the Berkeley City Club is still a masterpiece of elegant structure, with all bits and pieces falling in line to render a harmonious whole. Furthermore, Julia was not above inventing her own modern architectural style; as I understand it, her creative talent came into full bloom whenever she was to design a swimming pool on the premises. Already in San Simeon, the two swimming pools are architectural masterpieces. But they are surpassed by the subtle elegance and shimmering beauty of the pool in the City Club, where Julia is showing with bravour, that she could be a master of Art Nouveau or, for that sake, Art Déco, if she so desired, which of course she seldom did. One of her feet was always firmly grounded in the architectural style she had learned once upon a time in Paris and she refused categorically – in her more mature age – to design buildings in a modern style, such as the functionalist style that came en vogue in the 'thirties. 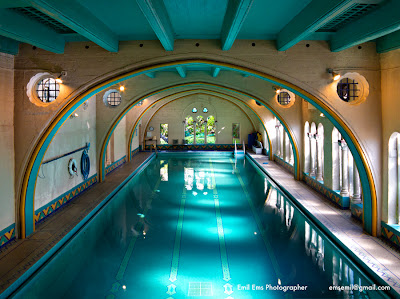 How extraordinarily interesting to read about this excellent woman! Thanks for allowing us to make her acquaintance!
Best regards
Eva

Very sweet tribute! Well written and interesting. Beautiful photographs! We are blessed by your talent and social graces. I enjoyed our lunch. Please remain in touch and inform on how long you will stay.
Warm regards,
Laura

Hi Emil
I feel very blessed having grown up in Berkeley and for being able to see Julia Morgan's beautiful work.
You have a great eye for photography, your photos are incredible, you bring a new light to subjects I haven't seen for some time.
Ken

Emil,
Thanks for the latest blog on Julia Morgan. You are an amazing blogger and historian; perceptive, sensitive, erudite, in addition to being a skillful writer and astute photographer (even with your latest mini digital camera that you so charmingly hated initially). You know more about the cultural and natural-world history of the SF Bay Area than most long-time residents. I honor you as the unofficial historian of Berkeley and the East Bay Area.
Best wishes, rudi

This has been my favorite hotel/swimming place in Berkeley since I was 5 yrs old. I always thought I was being taken to an enchanted castle to swim in a grotto. Better in every way than Ludwig's grotto....
Better come soon for garden shoot...Everything will start exploding with color this weekend.
Elizabeth on Oxford