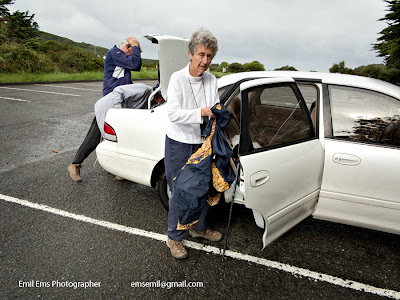 You don't recall Harry, you say? Well, it has been some time, but there is an ancient blog post to remind you: two years ago, I went to a nice regional wilderness called Sunol and met this pleasant gentleman on the hike. He became a regular commentator on the blog thereafter and enriched it with his in-depth knowledge of the Berkeley of yore.

In my on-going mission to locate all the people figuring prominently in the book "Fiat Lux! ..." I visited Harry two weeks ago in his home in Sunnyvale, far south on the Peninsula. He lives there in a pleasant house together with his partner Francis and we spent a nice afternoon together, talking about this and that as elderly gentlemen have the habit of doing. It emerged that Harry is one of the very few true Americans, in the sense that all his forefathers at least three generations back have been born here. Here you can see him sitting in his favorite chair, after showing me another one that was his great grandmother's favorite chair (he had a picture of her in the chair to prove it!). Unfortunately, I forgot to take a picture of that invaluable link to the past. An unforgivable relapse! 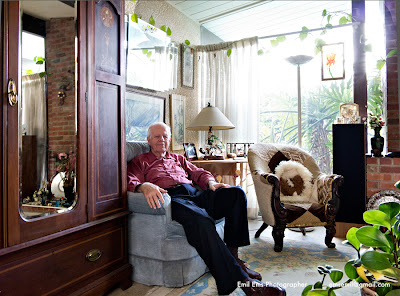 During our conversation I learned that Harry had taken an engineering degree at UCB. I had kind of suspected this all along, since this octogenarian had always exhibited an uncanny sense for details. As an example, he showed me on Google Map, that I should be able to see the UCB Campanile straight ahead, when entering Telegraph from Stuart Street on my way to Campus. I did not believe him, of course. Had I not trodden this path hundreds of time, already in the 'seventies, two years ago and again this year, without ever gaining the slightest glimpse of Campanile?

Well back home again, I had to investigate further, that goes without saying. And, sure enough, if you were standing smash in the middle of Telegraph Avenue, coming from Stuart Street, Campanile would lay straight ahead of you. I had never noticed this before, since I never had crossed the street at this very crossing, preferring always to proceed versus Campus on the left side of Telegraph. 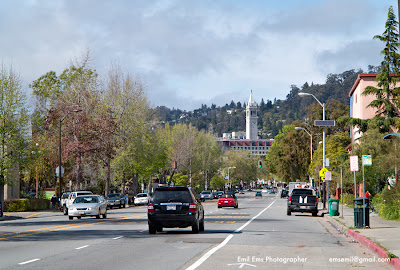 But enough about my beaten paths, we have to move the story onwards! Harry is a great hiker, getting out into the wilderness every week with a group of friends, who have been doing that for years and years. A week ago, he kindly invited me to hike along, on a short walk up and around the San Bruno Mountain. This is a pronounced promontory, placed in the middle of the Peninsula south of San Francisco. It is not really a mountain, rather a large hill, a bit like the "mountains" in Wales. But it rises in sole majesty above the plain, providing sweeping views: northward to San Francisco, the Bay eastward and the Pacific westward. In short, a pleasure to walk around on!

The only problem with the hike was, as I thought when waiting for the hiking group – at rendezvous point BART Station "Colma" – that it was raining quite heavily and gusty winds were sending icy messages along my back. Furthermore, glancing in the direction of the mountain, it was completely invisible, fully hidden behind heavy rain clouds. So I called Harry on the mobile, expecting him to call off the hike. "You must be joking!", was his answer, so I braced myself for splashing paths under dark clouds. 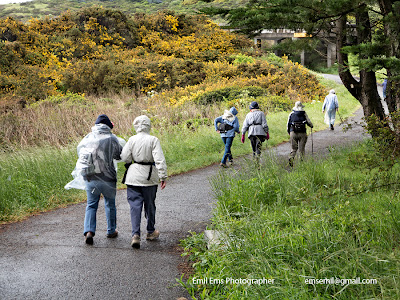 It turned out to be not so bad after all. Even if the beginning of the hike was windy and rainy, the sky soon started to lighten and, eventually, even the sun returned, enticing us to proceed with vigor.

Speaking of vigor, I have the habit of lingering now and then on a hike, in order to catch the scenery with my Canon (a new toy acquired two weeks ago!). Usually, I have no problem catching up with hiking partners, hikers usually choose to proceed at a leisurely pace. Not this group, I can tell you! I had a hard time keeping up with these old-timers and only my long photographing routine enabled me to get the odd picture, clicking the camera on the run, so to speak. 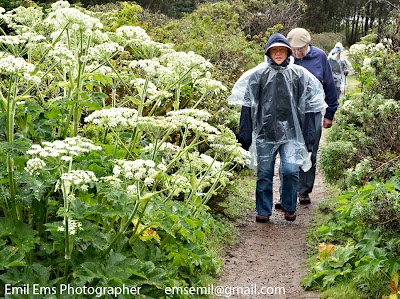 And real old-timers they were, my hiking companions! I don't believe many of them still saw this side of the 'eighties, a hardy group if I ever met one. But should this surprise me? People having been born in the great depression; gone through all child deceases without any modern medication or vaccination and acquired a robust physic as a result; grown up during WW II and having served in the Korean War; survived a long life with its risks of accident and grave illness surely should be able to do some serious exercise even in their 'eighties? We can but admire the lucky few who maintain vitality at that advanced age. Will those from our generation, who live that long, keep a correspondingly robust physic? I doubt it, our life has been too comfortable to train the body for long-time use! 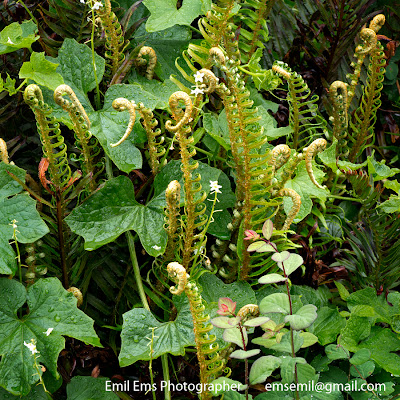 I usually come home from my hikes with at least ten good pictures of flowers to savor. I trust you understand by now that I had time for taking only two, with the rest of the group firmly pacing ahead. So you have to believe my word, that this large hill was full of blooms, many of which I had already seen and documented along the South Berkeley streets, even if they looked much purer and more enticing in their natural habitat. 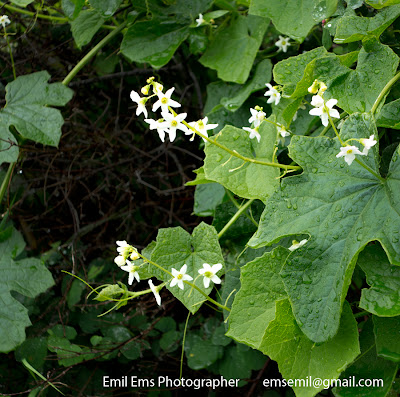 But there were other reasons for lifting the eyes from the microcosmos at my feet. After an hour's ascent, a beautiful vista opened up, as foretold above. In the hazy distance, San Francisco's skyline rose proudly to the occasion and soon it was possible to get a round view of the bay in all four compass directions. 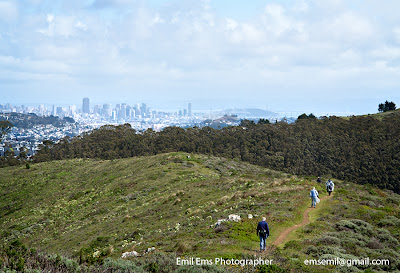 Here you see a picture of Harry standing on top of the mountain, explaining to us the route downwards and towards the cars, after having collected and assembled – together with a companion and with the aid of his walky-talky – alls stragglers and loafers like me. 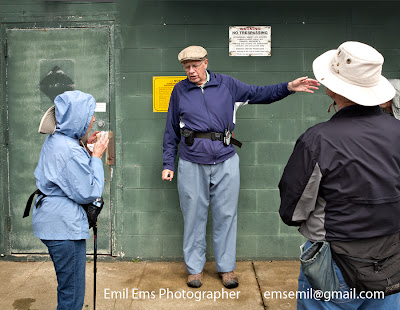 Down we went, from a hilltop somehow incongruously adorned by a multitude of masts and antennas and soon got the community of Colma back in sight, resting at our feet so to speak. Walking and sliding downwards was of course much easier than laboring upwards and soon we were – aided by the sun re-appearing in full splendor – back at the cars and eventually at Colma BART station. 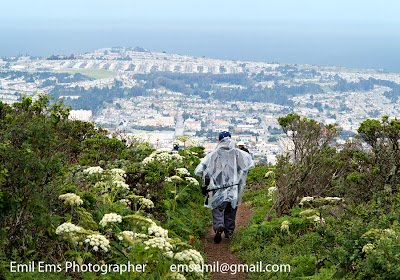 Well there, I decide to take a stroll along the streets of this relatively new settlement and it turned out to be a good decision. Just a few minutes beyond the station, a nice vista of the San Bruno Mountain opened up, providing me with the view that had been refused me in the morning by less benevolent weather. I trust you understand better now what I meant by a "multitude of masts and antennas". 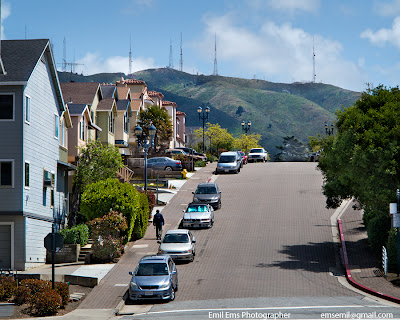 Walking around the corner from there I could observe a rather nice new neighborhood of houses arranged somewhat like in the Swedish style. An interesting contrast to the long-established and flowering neighborhood in South Berkeley, don't you think?