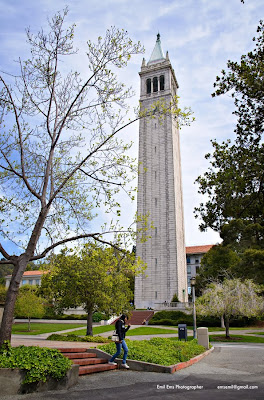 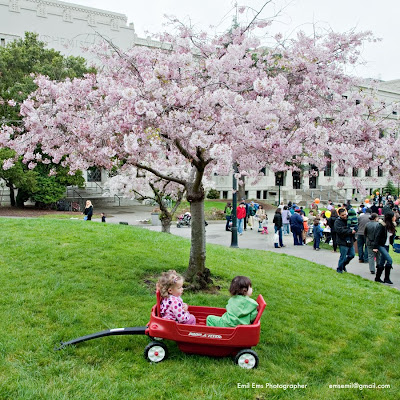 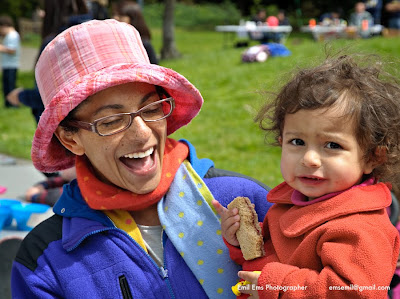 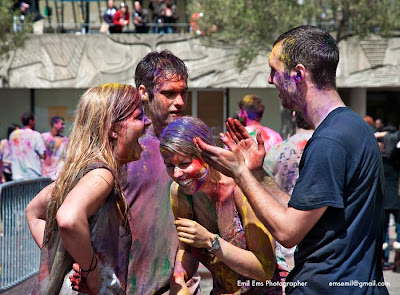 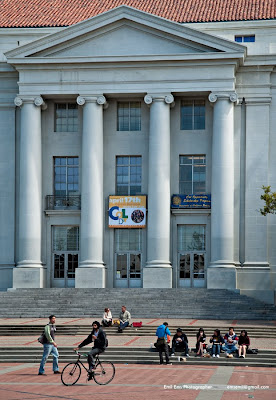 Day before yesterday I boarded my United Airlines flight at Dulles airport. Note quite uneventful. There is no manual check-in anymore at that airline’s desk. Instead, the traveller is confronted by a row of check-in machines, each with an employee behind to explain how to use it. My advisor happened to give me false instructions, so my electronic reservation was cancelled by the computer. It took tremendous diplomatic efforts to convince the supervisor of my legitimate travel request. That having been accomplished, the rest of the trip to San Francisco went smoothly, with rash and efficient service on board.
My landlady welcomed me with open arms, when I eventually arrived at my forthcoming Berkeley residence. After a good night’s sleep I ventured forth, yesterday morning, to regain familiarity with the University of California at Berkeley (UCB) campus, the major point of interest for my two months’ adventure. I did not expect much excitement on that initially foggy Saturday before Easter Day, but man, was I wrong. The whole campus sizzled with events, as if all of Berkeley had decided that this was the day to congregate at UCB.
To mention just a few of the events: there was an Easter egg hunting and generally child entertainment festivity on the green grass lawns behind the Biology building. Easter Bunnies were throwing eggs (of plastic, thankfully) everywhere on the big lawn, with all Berkeley’s children, it seemed, screaming with delight and collecting eggs in big baskets. Happy parents and grannies accompanied them on the hunt and hunted in turn their offspring with ever clicking cameras. All in all, a delightful view to digest for a newborn blogger.

In one of the other classical campus halls, Wheeler Hall, a lecture on geology was given to a large audience, as part of a week-long conference. I managed to sneak in to get a healthy luncheon, served by an Indian caterer at nominal prices, and to be enjoyed whilst sitting outside the building on one of the numerous benches and under the sun, which by then already had chased the fog away.

Initially I had planned an hour’s photographic activity, to catch pictures of the campus during the weekend hiatus. Instead I spent 8 hours there without a calm moment and have more than 200 pictures to show for it. A positive start for my two months’ séjour indeed!

Dear Emil,
I am sitting here in front of my computer in cloudy and wet old germany enjoying the quite different scenery you described from Berkeley.
Yours sincerely
Andeas Germany

Emil,
You always happen to go to hotspots. Not many hrs after you arrived there is an earthquake in Californa/Mexico. Was it felt all the way to SF? In a few hrs time I will call daughter Jenny to find out about what happened a bit south of you, in LA. In LA Times people have posted stories about high-rises downtown that went swaying for a couple of minutes.
While in SF why don't you call upon our old friend Eva Meyersson, married Paul Milgrom, both working at Stanford. I'm sure she´d like a call.
Best wishes Emil and thanks for nice photos.

Emil, Sorry for the delay in responding but mastering blogg technology has proved a challenge!

Thanks for the magnificantly literary account of your journey. It will take its place along side those of Baedecker, Michelin and possibly also de Toqueville.

The cherry trees that you admired in Washington were a gift by Japan after the first world war. They may have caused mixed feelings after Pearl Harbor but remain a splendid sight and the blossoms are a traditional sign of spring.

As you observe, Washington D.C. is an imperial city, as one could expect for a city designed, as Thorsteinn points out, by a Frenchman. Pierre de L'Enfant was a military engineer who joined General Washington's troops. (The name for Dupont Circle had a more commercial inspiriation.) Imbued with the rationalism of the French Enlightenment, L'Enfant based his city plan on a grid design, with the Capitol symolically placed at the common origo of four quadrants. He named the horzontal streets after the letters of the alphabet and the vertical streets after numbers. Consequently, you must always add a NE or SW etc to identify at which of the four possible intersections of e g K Street and 42 Street you plan to meet someone. The only deviation from the grid design is the diagonal avenues named after some of the 13 States, such as Pennsylvania Avenue which runs from the Capitol to the White House and allows the legislative and executive powers to keep an eye on each other.

As a result of these spacious avenues, triangular lots arose, which were too small to build on and hence host the many statues of Latin American and European generals that fought in the American Revolution. To Sweden's shame, Axel von Fersen, the gallant would-be saviour of Marie Antoinette, is not among those so celebrated.

Washington D.C. was not the first capital of the new nation (Philadelphia was a predecessor). The founding fathers eventually agreed to cut out a ten-by-ten miles square of Viginia and Maryland on both sides of the Potomac in the hope of accomodating divergent interests of the north and the south. Building went very slowly since the District was a dismal swamp, which the nickname of the State Department (Foggy Bottom) reminds us of. Dispairing of ever filling this wilderness with federal buildings, the District returned the part north of the Potomac to Maryland. Arlington, as that part is now called, was the family plantation of the southern General Robert E. Lee, which he abandonned after losing the civil war. (George Washington's Mount Vernon is in Viriginia south of the District.) No longer part of the District of Columbia, Arlington was not subject to its strict zoning laws. These limited the height of buildings to a small multiple of the width of the street on which they were situated. As a result, all of the sky scrappers of the capital area are located in Arlington while the truncated District retains its stately and majestic appearance. Let us hope that Arlington Cemetary and even the Pentagon are spared more sky scrappers!

I am pleased to see that my readers are getting used to blogging and leaving comments. We will get interactive at long last! Thanks a lot, all of you, for your efforts.

Richard, I haven't heard or felt anything concerning the earthquake you are talking about, probably because I do not have access to TV nor to my dear old Financial Times. Will have to find a source for the latter though. But I have to agree that an earthquake in the Bay Area is a distinct probability, asking for some mental preparations. As far as I know, the eastern part of Berkeley is built on alluvial slime that would wiggle dangerously at an earthquake, probably swallowing all habitats and inhabitants. However, I believe that UCB and my own dwelling rests on more rocky ground so there will be "only" quaking on our part. I live in a bungalow so no risk of a big house falling on my head. The major risk I gather to be fire, with all those gaz pipes that are leaking even now. I intend to hold firmly onto my camera, because the BLOG MUST GO ON!

Thank you for your suggestion to contact Eva, I will definitely follow it up and report back to you in a future blog.

Per, you are as always the superior author. I hope you will continue supplementing my humble efforts with your comprehensive wisdom. Let me just add to small infos on Washington DC. Dupont was a military person, which I could observe when looking at his monument, but it is easy to get confused with all those French family names. I fully agree that von Fersen would have merited a statue, but it is a small consolation for both of us that Raoul Wallenberg is remembered a statue and a street name, so the Swedes are not forgotten after all.

Emil, Great fun reading your blog. Later on you should write your memoirs (Preliminary title: Cosmopolitan Economist Down the Memory Lane), i'll come back to that. I wonder if the Chez Panisse restaurant is still around. I had a couple of very nice dinners there years ago (in 1982).