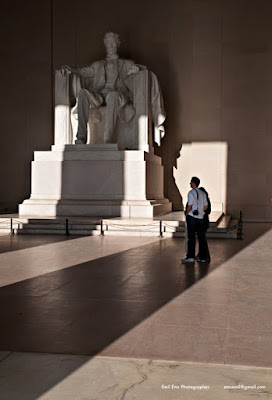 I'm getting slightly behind on my blog, so the date on top of the page is running ahead of the event I am writing about just now. The battery in my trusted laptop was running low in Washington and I did not have the necessary plug to reload it there. Now I am fit for fight again, having braced the difference in electricity connecting standards with a new little gadget.
After my exhausting exercises at the cherry blossom compound, I met, in the evening, with a dear old friend of mine, Lorenzo. We were graduate students together in Stockholm in the late seventies, so it was only fitting to have him join my voyage down memory lane for a short while. It turned out to be very educating. Lorenzo, although having started his graduate studies after me, managed to finish them a full EIGHT YEARS before me. It may have helped that he left the university of Stockholm to finish this thesis back home, since thesis productivity in Stockholm in those days was at an all time low.
After a short spell as professor at Howard, Lorenzo became senior economist at the Federal Energy Agency, helping to refurbish that body's regulatory régime. Thereafter he had to answer his wife's urgent calls to help him build up a publishing emporium, crowned by the impressive magazine "Sister to Sister" (http://s2smagazine.com/).
He told me about his interesting and valuable professional experiences during the "great recession". It turned out that this turbulence had a disturbing effect on morale in the US world of small business. For a short time it was like relations with suppliers and distributors were breaking down, everyone desperately trying to save his own financial skin, in view of disappearing consumer demand. His company was also affected by this general turmoil, but he managed to steer it through the malström, and he has now good hopes for its future, since the necessary adaptation resulted in a leaner and more efficient enterprise. 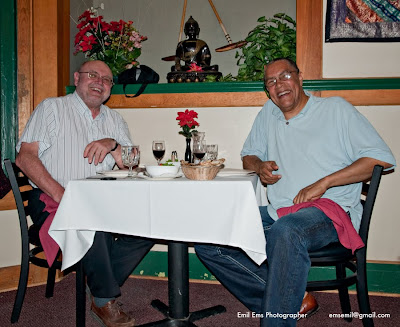 We also reminisced about our former meetings in Washington. Back in 1980 he and his wife Jamie generously lent me a Dodge Dart they had inherited and let me drive it across the continent and back. This was a most impressive vehicle, baptized by my former wife Alice "psychedelic auto", due to its elaborate patterns on the roof. But it held up well, despite my bad driving habits, and delivered us to Berkeley and safely back to Washington, taking in most national parks along its way. The voyage must have re-invigorated this battle ship of the road since, as Lorenzo told me, it stayed with the family for many years thereafter and it took a major accident to finally put it to rest.
Posted by Emil Ems at 16:04

I appreciate getting a comment from you, Hans Christian, and would like to thank you for your compliments.

The side of the pond opposite to the Lincoln Memorial is, to our regret, already occupied by a huge WWII Memorial, as well as a wall memorizing all the dead from the Vietnam war. So poor Martin Luther has to find another place. As a consolation price, I discovered to my surprise that a main avenue here in Berkeley has been re-baptised in his name since last time we were here together.