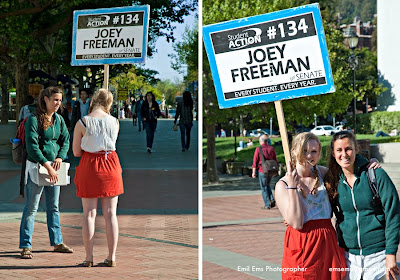 No, this is not about the forthcoming election to the House of Representatives, this one is far more interesting and capricious. 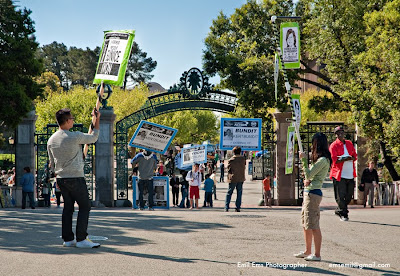 When I visited the good old UCB Campus yesterday afternoon (I am always there a couple of hours if I have nothing else to do) I witnessed great excitement and ruckus near Sather Gate (the entrance gate in green copper) and Sproul Placa (the court between the administration building, with its high pillars, and Sproul Hall). I thought first, like you – admit it – that a general election was in motion. But it was of course the election to the governing body of ASUC, the UCB student body.
Quite unlike elections to student representatives in Sweden, which used to be discrete, almost invisible affairs, at least in my times, this one is taken serious and is being organised quite like state and federal elections. Lots of candidates fight for the post of president and seats at the Senate. Although there are parties like back home, it is the persons that count and this shows in the verve with which the candidates are being presented or present themselves. 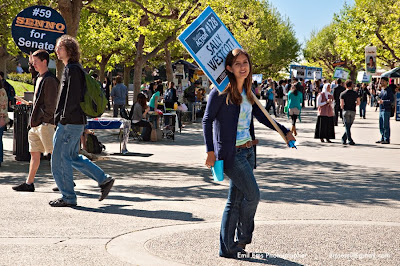 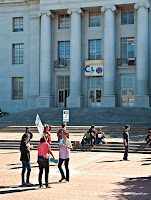 That notwithstanding, good humour prevails and everyone seems to be having great fun. I was drawn into the general excitement when observing two candidates practising a version of Californian line dance. Observing my vain efforts to get this on camera, they forced me to participate and I even learned a new dancing step or two. Fortunately, none of this is documented on film, so it can stay our secret.

The voting has already begun and will continue until tomorrow. I managed to sneak into the “command center” of the student voting committee and could document the serious clergymen present at their work. The center should actually be fully manned, but lunch had lured all but a few away, leaving those to keep the fort in the mean-time. 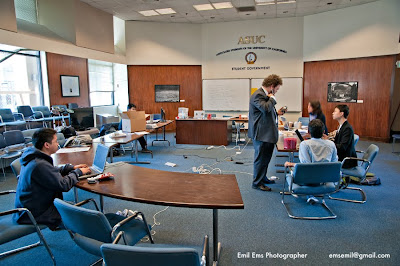 POSTSCRIPT: You may have noticed that the pictures now are being placed in the text, instead of unceremoniously being dumped at the blog's beginning. This is thanks to a generous young lady by the name of Heidi Harman, a follower of this blog, who taught me how to do this. If you would like to join in with my thanks, especially you ladies, take a look at her website www.runalong.se, your health condition won't regret it.

Emil, I wrote a quite long thing for you but it seems to have disappeared, I must have pressed the wrong buttoms. It seems as if I have not yet mastered the technique I am too lazy to reconstruct it now. But I plan to come back, among other things answering your question on the theater. Lars

Im glad i could help out and im happy to see its working out so neatly for you! Keep up the good work!

Dear Emil,
once again I notice the good quality of your text-and picture-messages. It seems to me that you and your camera can handle extreme differences between dark and light parts in one picture quite easily. Let me know how you do it.
Greetings from Andreas (Germany)

Emil, I make a new attempt. What I first of all want to say is that it is a great pleasure reading your things. I look forward to every new piece. Then I also want to say that I felt exhilarated, enthusiastic, happy when reading about the Berkeley Campus. Isn't that one of the nicest places on earth? Nothing in Sweden can compete with it, not even the campus of KTH (Royal School of Technology) in Stockholm, probably number one in Sweden in this respect, but far below Berkeley. You asked me about the theater in Berkeley, and that is the Berkeley Repertory Theater which is still around at 2025 Arlington Street. I saw Bernard Shaw's Heartbreak House there 28 years ago, all I remember is that the play was both serious and fun. Now (according to Google) they give something called Girlfriend. Sounds nice, but quality unknown. There is actually another theater in Berkeley, the Live Oak Theater at 1301 Skattuck Ave. I was there together with Debreu and Karl Vind, the latter a pupil, or perhaps junior colleague, of Debreu, prof. at Copenhagen U. He visited our Dept, in Stockholm at least twice, so perhaps you met him. Anyway, the reason we went there was that Vind's wife took part in the performance which consisted of play, dancing, singing, etc. The kind of thins you say was "interesting" when people ask you to give verdict. They will now give a play by Sam Shepard, who I think is the one who wrote the play that became the film "Paris, Texas" about 20 years ago. A very ood film. I also went to a dance performance by the choreographer Merce Cunningham, at Zellerbech Auditorium, on the campus. He (if still alive) would probably ask you to join his company if he had the opportunity to watch your performance on the campus a few days ago. As you see, I am good at boasting. So I will not say anything abour the Opera and the Symphony Hall in San Francisco, except that the Opera is the place where the UN had its very first meeting. Lars

Emil, You are taking us on a collective stroll down memory lane. Seeing your pictures and reading the comments that your text inspires and the memories that it stirs, I feel as though I am walking arm in arm with you, Lars and others and that HH is cheering us on when we tire! I recall Sam Shepard as a very handsome actor in a couple of forgotten movies and also a rather good book about the UN Meeting in SF calle "Present at the Creation" by Schulzberger, I believe the son of the well-known journalist.

I eagerly await tomorrow's stroll.
Per

You pose a good question, showing that you are an excellent photographer at heart, but also allowing me to brag a little about my photos :-).

It is very true that I am in love of taking pictures against the sun or, at least, a sharp angle against the sun. In the good old days of Kodachrome that was most of the time a recipe for disaster. The slide films of yore were very contrasty in themselves and I had always to throw away the majority of my takes, due to major parts of the picture being in deep shadow. Eventually I gave up and took pictures only with the sun on my side.

With digital photos it has, fortunately, now become possible to "dodge and burn" color pictures just as we always did before with black and white negatives. So I can now shoot against the sun to my heart's delight. It is still essential though not to overdo it and to preserve the color logic. In fact, a major part of the two hours I have to spend on each photo, to get it ready for the blog, is spent on selectively lightening shadows and darkening highlight. This is especially important since Berkeley is located way south and shadows become very deep towards midday.

I'm very impressed by the quality of your lay-out. I read quite a bit of blogs and yours is fine. I saw that campus twice; 2001 was the latest. Lively place!

corrigendum
Unpacking my library afer moving, I find that the book about the first UN meeting in San Francisco that I referred to above is called Act of Creation, written by Stephen Schlesinger, and published by Westview Press. I believe he is the son of Arthur.
Ah fickle memory!
Per

Thank you for your kind compliments. i am sure that I don't deserve them yet but, with practice, I will endeavor to live up to your praise.