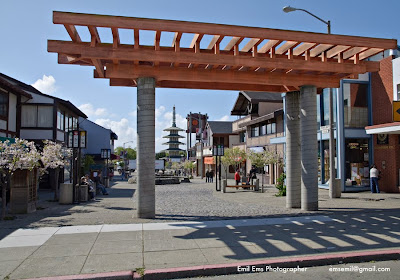 Last Tuesday, my Japanese landlady, who had business in San Francisco, offered me to join her in a visit to Japan town, a small Japanese enclave in the centre. To this effect she sorted her fire red Toyota from the garage and proudly invited me into the cabin of this excellent two-seater. 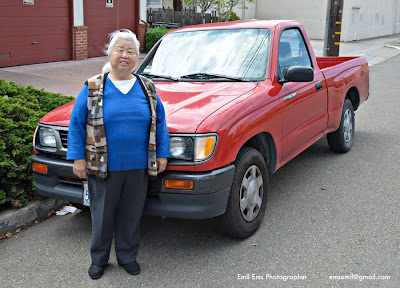 Off we went down Ashby Avenue and on to the freeway leading to the Bay Bridge. Just before the toll station, Nobuko explained to me that a car full with riders was exempted from the substantial charge. Two-seaters, with appropriate cargo room in the back, were as made for this condition, since it took only one passenger to get a free ride across the bridge. She added that her car had attracted many offers since it also, besides the above mentioned advantage, was well kept and looking as new. I soon could confirm this when parking the car upon our arrival, since we immediately got a hooting and applauses from a passing vehicle. 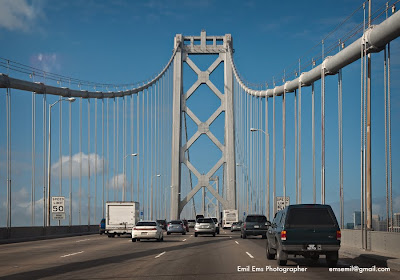 But I am rushing ahead of events. Back to where we left off at the toll station! After whooshing, on a sidetrack, past a serious queue of paying vehicles, we soon sailed across the Bay Bridge, an impressive edifice, indeed. It is spanning the Bay in two wide arches, with the middle part securely fastened to two small islands, one of which carries the intriguing name of Treasure Island. After having left the bridge behind us, it was surprisingly easy to approach the centre of San Francisco, since freeway 101 reaches almost all the way in.

Japan town lies on Geary Street, just a few blocks from the freeway run-off. You would be mistaken to expect an exotic relic of historical buildings with Asian flair. This is not a miniature version of Kyoto. Rather, the commercial quarters of Tokyo come to mind as an apt comparison. The quarter is dominated by a huge (at least in European terms) shopping centre, straddling several blocks. In its middle, an intriguing Pagoda strives for the sky, built in raw concrete, like the other edifices within the centre. The architectural style of all this comes closest to, let’s say, pre-postmodern modernism. The only architectural manifest of old Japan, albeit on concrete pillars, is to be found a block away, in a gentle Torii, the arch traditionally guarding a Shinto shrine. 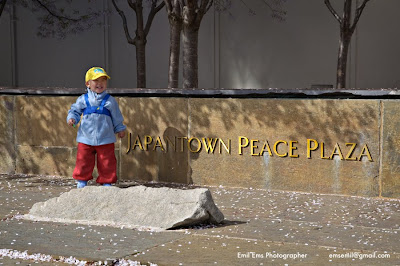 For those of you not familiar with the precise meaning of this concept, I had been told, at my visit to Japan in the ‘nineties, that Torii was among the oldest manifestations of one of the oldest still practised religions in the world. It represents no other than the Perch of the “Urhenne”, the Original Hen, who laid the world as its egg. We stand aghast at such ancient wisdom of maintaining a religion intact throughout the ages and letting it mature in line with the development of humanity, rather than letting it be overthrown by urging, more recent, generations, as was the case in Europe some 1700 years ago.

In line with this, the whole neighbourhood is breathing gentile serenity, aided by a population that in day-time is consisting mostly of people of certain seniority, still very Japanese in clothing and behaviour. Whilst strolling along a few of the side streets I happened upon two true philosophers, one of them a street sweeper of Philippine origin and the other his Japanese friend. In a friendly banter between strangers, I made the mistake of challenging them on the valour of Buddhism, maintaining that this religion, which held the promise of complete disintegration into nothingness as sole remedy against the fear of death, hardly represented a valid consolation for a tortured elderly already glimpsing his inevitable demise. 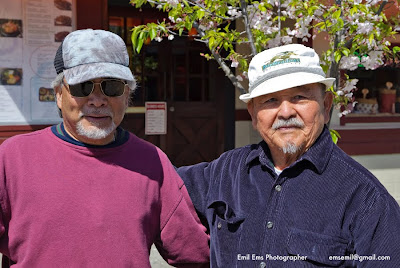 Their gentle rebuttal was that, in contrast to Christianity and other juvenile beliefs, a man seriously embarking on bettering himself would, in case of failure, have both a second, third, fourth and so forth chance, until circumstances, as well as strong spiritual discipline, kept him on the right road to Nirvana. Confronted with such superior wisdom I had to acknowledge defeat and we went our separate ways as friends. 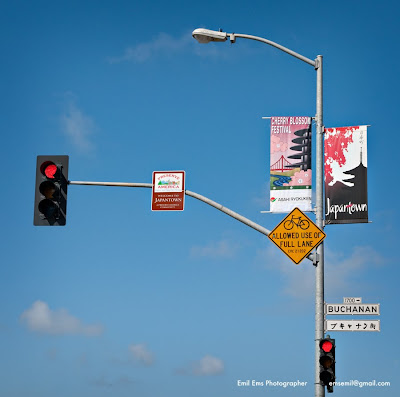 Encouraged by this spiritual intercourse I took a short walk with the aim to achieve a more harmonious view of the Pagoda than that provided from within the Japan quarters. After gaining a healthy distance from the shopping centre, I could finally succeed, across a heavily trafficked six-lane drive and using my telephoto lens, to place this worthy religious symbol into a more fitting surrounding. 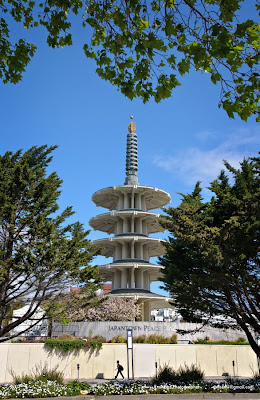 With still some time to spare before reunion with Nobuko, I bought a coffee and glanced in a brochure laying out the plan for the forthcoming Cherry Blossom Festival. This reminded me of 1977, when we, by pure chance, happened to be in the neighbourhood as a grand street parade took off, which I have kept in fond memory as well as kept documented in an often admired slide tray. I decided on the spot that it would do me some good to revisit that parade coming Sunday and I am hoping for an event at least as grand as that of 1977. Watch out for a posting on this topic next week or so. 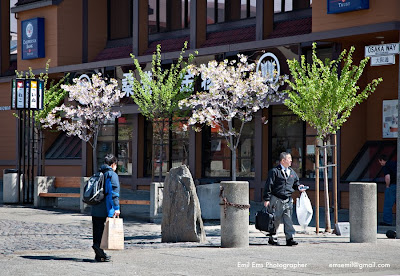 Upon her return, Nobuko generously invited me to lunch in a traditional Sushi restaurant. The variety of plates that were presented us by small ships sailing past before our noses, without interruption, was stupendous. I did not recognise even half of the dishes, despite having frequented Japanese restaurants in Brussels and Stockholm often enough. Thus was revealed a piece of the real Japan. Sophistication in produce always was, and always will be, in my eyes the true essence of Nippon. 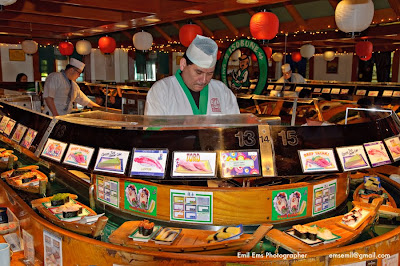 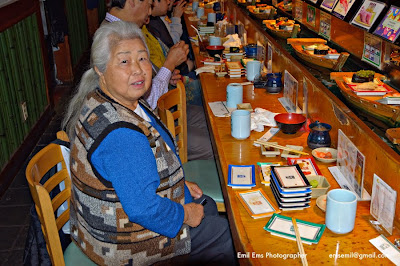 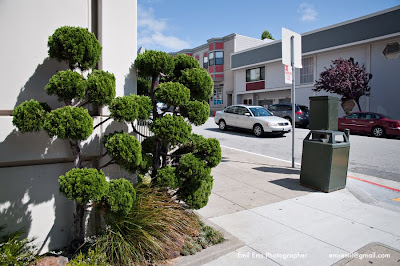 Japan Town must have been an interesting experience! I liked it very much when we visited it two years ago. We should have tried this Sushi restaurant.
Balazs

Im glad you Like Japan town, great pictures, especially the last one with the plant, adorable! Heres a link to my Japan blog i created while visiting Japan in 2006, maybe you will like it!
http://nipponadventuresofmissk.blogspot.com/

Dear Balazs,
I am glad you liked Japan Town. The more since I will soon be publishing a blog about the biggest event of the year taking place there: the big Cherry Blossom Festival Parade that I witnessed last Sunday. Lots of pictures to work on so the tale will not be told for another week or so, I am afraid. But I will keep you posted as usual, when it is ready.

Dear Heidi,
Thank you kindly for appreciating my pictures from the place. I try always to do my best with them and love to see them liked, especially those a bit out of the ordinary. I have of course immediately checked your blog and found it full of charming impressions. How nice it must be to be young! I have unfortunately forgotten all about it. My blog must seem unbelievably lengthy and boring to you, compared with your concise and witty lines.