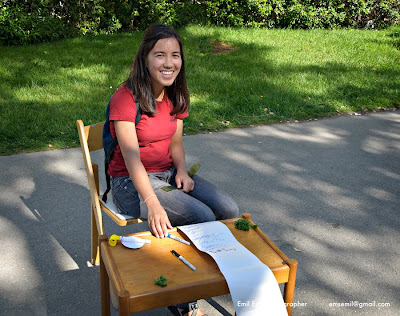 No, this posting is not about the ”Big Game”, the annual football match between UCB and Stanford, which takes place in autumn. Neither have I misrepresented the second part of the sentence. The title alludes to Memorial Glade, the largest university green and playground that I have ever experienced and I would like to share with you the youthful boisterousness and creativity in playing games that is exhibited there, when students, wary from their study work, are letting off steam and having a good time. 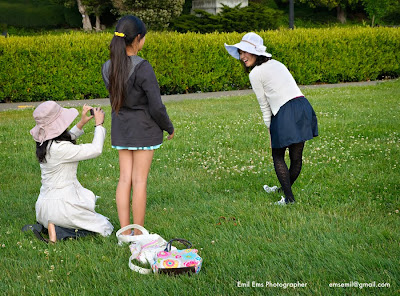 Lest you believe that campus life is all play and fun, let me start by pointing out that study work at Berkeley generally is hard and demanding. In my days, the academic year consisted of three “quarters” of 10 weeks each. In each quarter you had to enrol in, and study in parallel, at least three classes à three lectures per week. In week 5 there were mid-term exams WITHOUT ANY PRIOR STUDY RECESS. In fact, exams were given the day after the last lecture and questions asked also on that lecture’s content. This forced the students to start learning from day one and never let go. For the final exams, a grace period of three days was granted for preparations. You had to achieve a minimum grading in all three classes. If you failed in one of them, you were already at risk of being thrown out of College and forced to descend to an institute of lesser distinction. 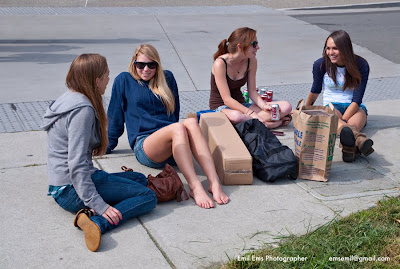 Since I was a visiting graduate student, I did not have to strictly observe the rule of three parallel lectures, but abided by the regime nonetheless, for my own sake. I can safely say that I learned more in that one year than in all my other 15 years of graduate studies! The intensive stuffing with three concurrent themes did wonders to my brain capacity and I learned for the first time in my life what it means to have a disciplined study plan. 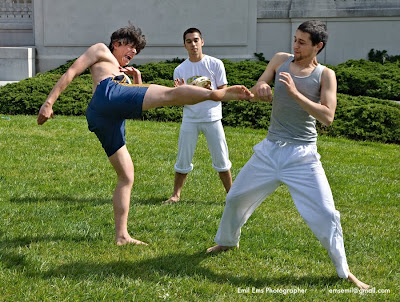 There was no 8 hours’ day to speak of for the students. The main student libraries were open long into the night and always full. I could observe students literally collapsing over their books, suddenly waking up half an hour or so later and forcefully continuing their stuffing as if nothing had happened; this until the small hours and still having to make it to the next lecture at, possibly, nine o’clock in the morning. 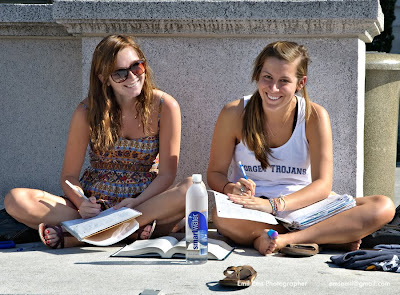 Just before writing this I had a short conversation with two undergraduates at the student cafeteria and they confirmed to me that work conditions are pretty much the same as of yore. As the main difference, the academic year is now divided into two semesters of 15 weeks each. 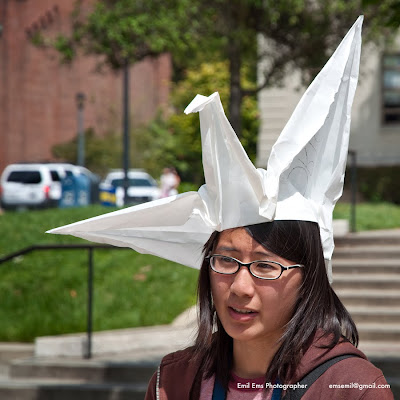 As spring arrives and the sun is starting to warm up the campus towards the evenings, the bent up energy of the students, having to remain fixed to their chairs far too long, tends to erupt into joyful playing, in particular on Friday evenings, with a weekend beckoning. This I was lucky to witness on some occasions during the first weeks of April. A major part of the action takes place on Memorial Glade, as well as in the area around Sather Gate. 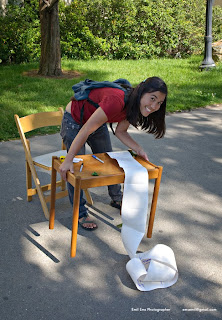 Let me start by presenting to you the nice young lady on the cover picture, Catherine, whom I met late on a Friday afternoon, whilst entering campus from the North. She had invented a rather sophisticated game all of her own. As she explained it to me, the aim was to get the table she was sitting at from North Gate to Sather Gate. Every time someone signed her “petition”, placed on an immense parchment roll, the table would be moved one meter, or so, southward. I of course signed my name immediately, whereupon she moved the table so quickly that I could not manage to take a picture. When asking her to move it again, she said “not without another signature, otherwise IT WOULD BE CHEATING”; so I had to sign again. All this was done with obvious glee and we both had a marvellous time during the conversation. For me, Catherine represents the quintessence of intelligent campus playfulness. If your read this, Catherine, please let us know how long it took you to arrive at Sather Gate. 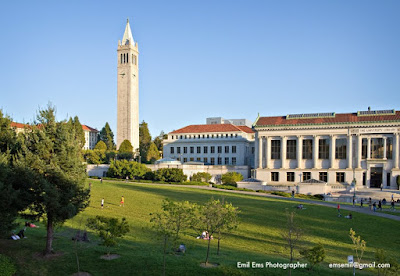 Continuing at a quicker pace than hers, but along the same trajectory, I soon arrived at a wonderful vista, with the outstretched greenery of Memorial Glade spread out before me, bordered by two of the most beautiful buildings on campus, the University Library and the Campanile, all bathed in the glorious warmth of late evening sunlight. The library, in particular, stroked my fancy in this flattering light, reminding me about the Pallas Athena temple on Parthenon. 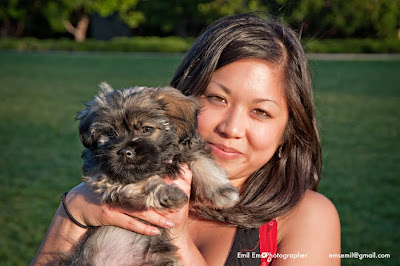 Far down on the glade I glimpsed a couple running around as if playing football. It turned out that they were not the only ones chasing the ball; there was strong competition from a dog, who had misunderstood the nature of the game. But this delighted the youngsters even more and a merry chase could be observed all over the glade. 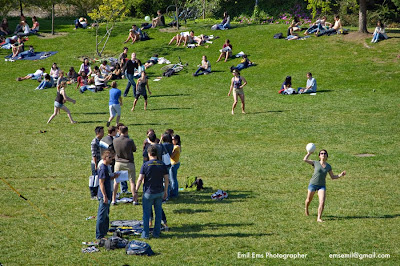 At a later April Friday I was out somewhat earlier and found the glade yet more full of pouncing students. A small group of more mature youngsters, some of them already engaged as teachers, were engaged in a charming game they called “playing hacky sack”, a bit like European football with a small ball they balanced between them. It would tire you to hear about all the other games having been played at the glade that day but I feel obliged to emphasize that the reclining young man, in the picture that follows, assured me he was smoking tobacco. 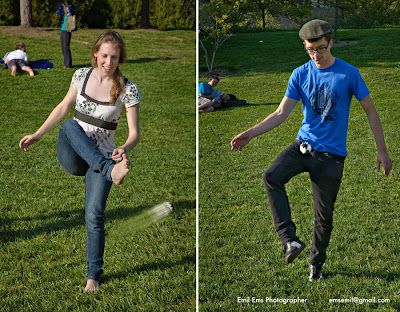 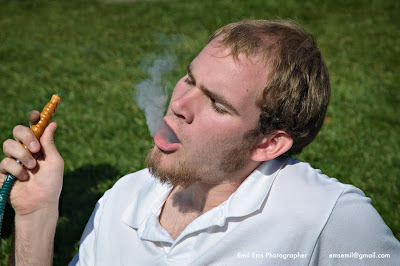 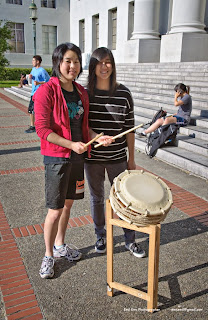 Moving on from the greens to Sather Gate and Sproul Plaza at the southern entrance, the crowd was as vivid and creative there. Japanese drummers geared up for a performance to be given the week after; the Student Octet was giving an improvised performance, much admired by a youthful audience; swing was being danced with enthusiasm on the square; and a large dancing group practiced for a performance just in front of Sproul Hall. Last but not least, a group of newcomers, MBA students to be, enticed passing students, including myself, to participate in the venerable Telephone Game: we were all told to stand in a circle and to whisper a message from ear to ear, only to find out at the end that not much of the original message remained. 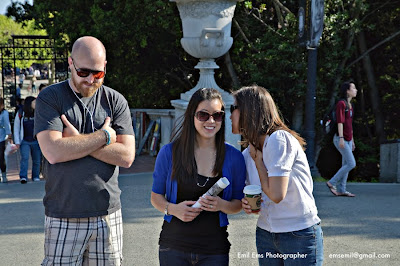 To sum up, if you approach the Berkeley Campus at the right time of the year, week and hour, you will find it to be one huge outdoor theatre, with a manifold of scenes, all being occupied by enthusiastic and creative performers, to the observer’s delight. 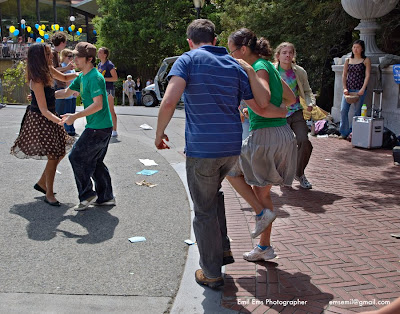 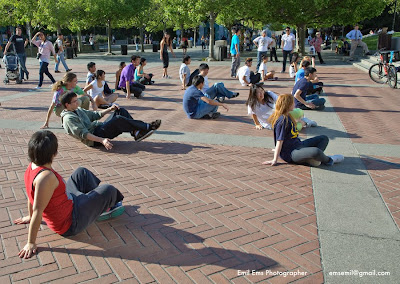 Great job Emil! So glad you had the chance to photograph our hacky-sack game. I've enjoyed looking through the pictures from your adventures in the area. Glad you're enjoying Berkeley. We hope to see you around again on Memorial Glade soon!!

Dear Emil,
Thanks for another humorous account of your California adventures.
Stories like yours and all your marvelous pictures of these young students make one feel a bit sad for not being one of them. Fortunately though, also as a retiree one can still study and I can ensure you that nowadays I read even more than three books in parallel.
It seems you forgot to mention what Catherine’s petition was about. I guess you were so charmed by her lovely smile that you would have agreed to sign just about anything.

I thought I'd let you know that it only took me 45 minutes to Sproul! A whopping success!

The petition supported the immediate realization of the Sproul Dream Act, which moved my little table from the boring north end of campus to all the exciting table action at Sproul Plaza. Each signature allowed me to move one foot (very precisely measured). Emil here really showed a lot of support for my cause and signed it twice.

But to be honest, Sproul wasn't all that much better than North Gate and I got a little homesick.

It was great to meet you Emil! I wish you more fun adventures.

Dear Laura,
I am pleased to receive, from you, the very first comment by the fellowship of charming young people that populate this marvelous Campus. I sincerely hope to receive many more remarks from your peers!

Dear Hans Christian,
If I understand it right, the petition involved the right to move from North Gate to South Gate; thus, the whole exercise was charmingly convoluted. But, the full truth can, of course, only be unveiled by the originatrix herself, which you can see by reading her comment.

Dear Catherine,
Thank you kindly for helping Hans Christian to a better understanding of your intriguing and intelligent venture

Dear Emil,
"Memory Glade" is not a usage I would expect. Google Satellite (not necessarily an authority) says "Memorial Glade." That seems appropriate, and several other features are some kind of a memorial, starting with the big football stadium on the hill. Most of the buildings are named in memory of someone.
The scene you show was not available when I was there. Before the war, I rode my bicycle down what my mother called "Engineering Glade" because of the fast start available from a steep slope on the west side of Hearst Mining Circle. After the war, the US Navy gave the University some barracks buildings which were moved in and called "T-buildings." We said that the usual life of a temporary building on the campus was forty years. That would have left them there until 1990. I do not know when they left.
The main library was old when I was there. The annex (eastern building) was built while I was attending classes in the T-buildings.
Harry