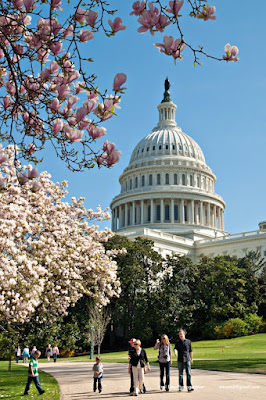 Yesterday turned out to be an arduous start to my voyage. After getting raised by the alarm at 5.45, a rush to the airport, trip to Copenhagen and then 8 loooong hours of flight to Dulles airport there still remained a loong 1 hour’s queueing at the border control. Finally 50 minutes cab ride to Churchill hotel. By then it was 17.00 local time, but already 2.00 in the morning by my body clock.

Still, the hotel informed me that THIS WAS THE DAY OF CHERRY BLOSSOMS, so no rest for this poor traveller. Just a quick jumping into the next cab to get off to the promised fields of cherry trees, thank you! Unfortunately, everyone else and his grandmother had the same idea, so the cab did not move forward at appreciable speed. Finally I stopped it and continued on foot the long journey to the Washington monument. The sun was moving rashly towards the horizon so speed was in order. Still, I managed to observe and catch some nice sceneries before it set and promised myself to be back there the morning after. 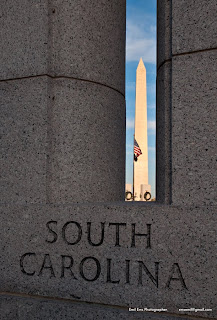 This promise I kept indeed, getting up with the sun and even HAVING BREAKFAST AT THE HOTEL, an unheard of action at USD 16! This time the cab driver got me to the Lincoln Memorial in reasonable time. From there I walked the whole national park that lies between Lincolm Memorial and the Congress, taking in the beautiful scenery and even getting it in the camera now and then. Cherry blossoms abounded indeed, particularly around the tidal basin, with the Jefferson Memorial providing an enticing background. Again, I was not the only one benefitting from the scenery, but it was early enough not to be trampled upon by enthusiastic fellow wanderers.

Although wary after the long walk to Capito Hill, a mound crowned by the impressive Congress building almost as big as the “Palais de Justice” in Brussels, I mustered the remaining energy to visit the edifice. Among hundreds and hundreds of fellow visitors, mostly Americans, the guides shepherded us with commendable efficiency around the premises. We were allowed to visit the huge room under the cupola, as well as the former Hall of Representatives. I was pleasantly surprised by the building, as well as by the guiding organisation, both of them to be copied, as soon as possible, by the European institutions.

Having said this, the whole inner city of Washington DC exhibits an air of subtle elegance that is, to my regret, completely missing in the capital of Europe. It could be that it takes hundreds of years of painful piling, stone upon stone, to get the desired effect, rather than piling concrete like elephant dump on suffering neighborhoods, as they do it in Brussels. To compare, the Congress building was finished first in 1886, some 90 years after the building started. The European Parliament was rushed through (with only scant planning) within 15 years. Not to speak about the Commission building that is still showing its disgrace, despite 15 years of refurbishing. Fortunately, none of the European buildings are set in stone, as the Washington buildings are, so they could easily be replaced once Europe would get its act together.
Posted by Emil Ems at 21:14

Hi Emil, I lived in DC in the late 1970s, while attending the American University. The city was designed from the ground up as a capitol by a French architecht, Dupont. Dupont Circle is named in his honor. The project naturally entailed far less constraints than the modernisation of ancient European city centres. The Washington Mall area has great museums, including Natural History, Modern Art and Air & Space. Kennedy's grave at Arlington Cemetery, close to George Washington's home, Mount Vernon, is fascinating with its eternal flame and with crosses of fallen soldiers almost as far as they eye can see. You should of course go on a tour of the Capitol building and if you can arrange it with short notice, a tour of the White House is great fun for the historically minded. Georgetown - Wisconsin and M Street, are nice for shopping.

Hi Emil, I love the photos that you've taken.
You have a great eye for photography. Nice angles. Kind regards/Andy

I am grateful for your suggestions, although I was not able to do a follow-up, since I had to leave Washington already the morning after. I will have to do the things you proposed at another trip. We will see. But please keep up the good work of providing me with suggestions of what to do, this time in the Bay Area and its surroundings. Here I will be able to follow your directions, since I will be staying put until the end of May.