WALK ON THE WILD SIDE 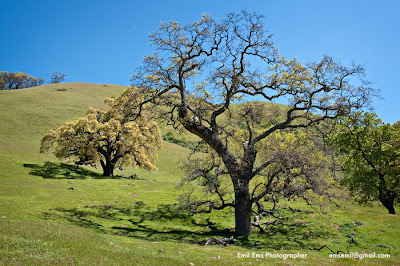 This is not about what you think, this is about some serious hiking! As I am writing this, heavy clouds are gathering outside my apartment, but it was not like this during last week here in Berkeley. Apparently, in spring, it is raining only during weekends, leaving the rest of the week for us people of leisure to enjoy the Bay bathed in gentle sun rays, whilst the inhabitants are busy at work.

Last Thursday I felt the urge to benefit from the generous sunshine and visit the Bay’s largest wilderness area, the SUNOL-OHLONE REGIONAL WILDERNESS. The name deserves to be written in capitals, since the area is HUGE. Maybe ten times as large as the Nacka Reservation, for you Stockholmers. This contiguous wilderness is not a wilderness in the European sense of the word. There is cattle grazing on the upper meadows, albeit in limited quantity, mostly to keep the ranges open, I believe. Still, this roomy nature invites wild animals of all kind to keep residence and the hiker may occasionally witness these marvels of nature. Lucky are those that have seen the “big three” in one day (including the night): the eagle, the falcon and the mountain lion. This was not to be for me, but I still saw best “seconds”; more about this below.

After half an hour’s drive across the Berkeley range and alongside our old acquaintance, Mount Diablo, a very pleasant country road brought me to the entrance of the park. Here came the first surprise: 35 years ago, this was a REAL wilderness, with just a few benches for barbecuing and no other service for visitors. Nowadays there is a visitor centre, and a kilometre long complex of picnic sites etc. More worryingly, you are no longer allowed to park where my old trail started, so my intended hike was prolonged by a close to an hour’s access detour. 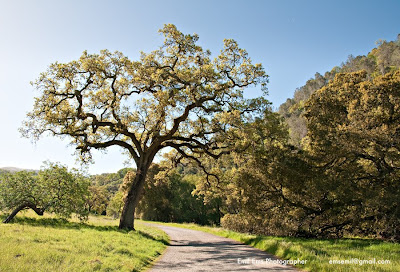 But it was worth it! The hike went initially along the reknown Alameda creek, almost a river now after intensive raining, but hardly a brook 35 years ago, when it had not rained for a full year. To my left the hills started to slowly rise, with hardy Californian oak crowning their crests. To my right the creek gurgled along, sheltered by groves of silvery sycamores, willows and, increasingly, bay trees, with the odd huge oak tree taking its rightful place among the more modest siblings. There is a saying that the creek was even more majestic in pre-Columbian times. The Spaniards, when first venturing upon it did not call it Alameda (“the Arcade”) for nothing. 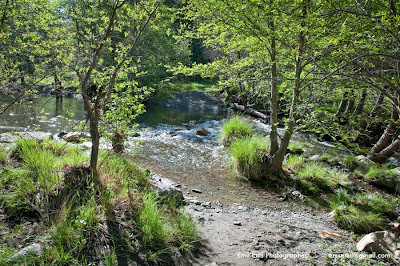 I decided to follow their example and honour the rushing stream with a closer presence. Deviating from the broader road, off I went into the wild river glades to admire the white gush of the waters and the cool shade of the “Arcade”. Unfortunately, the cool path proved to be a cul-de-sac, forcing me to fight my way back to the road through intense underbrush and a high cliff. But I was awarded for my troubles. When turning around after the arduous ascent I heard a whooshing sound and had the good luck of observing a huge bird descending on a giant oaktree along the river. When looking closer I glimpsed two of his siblings already roosting on the same branch. Out went my camera and “clapunck clapunck” it went. Fortunately it could catch the birds before all of them alighted, awakened by the brutal sound of a digital Nikon. What do you think, dear readers; what kind of bird did I observe and photograph? Make a pause in reading, have a look at the picture below and give it a go … 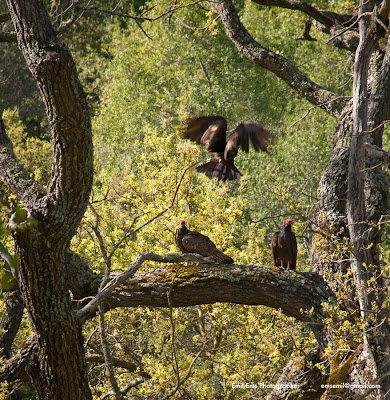 … “No”, these are not eagles resting majestically on an oak branch. These are TURKEY VULTURES, among the greatest birds roosting in the US. Only the Bald Eagle surpasses them in size, but barely. Both species have a wingspan of about 2 meters, the eagles a bit more. We are lucky that Their Feathered Hugenesses prefer carrion to fresh meat. Else you may feel uncomfortable having them around, ecpecting them any minute to whoosh down on you with their enormous wings and pick at your eyes! 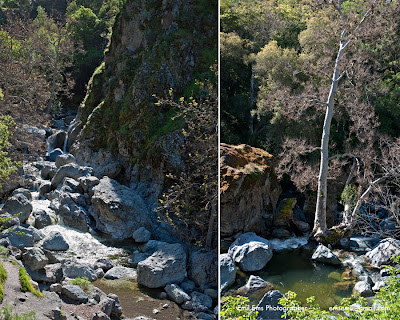 Heartened by this scene I moved further along the creek’s gurgling, which gradually became more intense. Eventually I arrived at a small glade with bench, which in the States always indicates A SIGHT TO BEHOLD. And I was not misled. The road had risen above the creek for some time now, so I was looking about 50 meters down into a gorge where the water glittered with gushing speed, preceded by a small waterfall further up the track. It seemed that I had arrived at “Little Yosemite”, one of the landmarks of Sunol. Well, there must be very few, if any other, waterfalls in the Bay area, for this little exhibit to be linked to Yosemite; it is so small that you hardly notice it in the picture. But small is beautiful and the scenery would have been worthy of admiration even without its misdirected denotation. 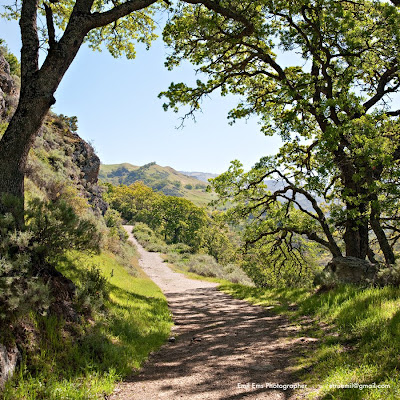 Just around the corner, a trail took off to the left, which I gladly followed, eager to gain the high meadows. As I climbed upwards, the scenery changed, with oaks becoming prevalent, if ever more sparse, and green ranges starting to open up. 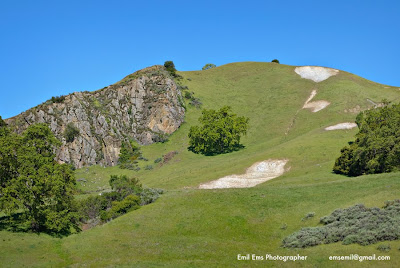 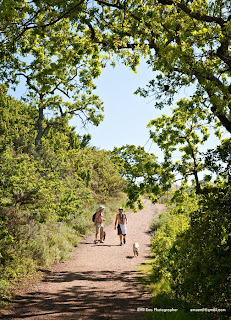 As I laboured along the path, I was suddenly met by whiffing dogs, which were as glad as myself to get company on this lonely trail. Two youngsters came strutting after, in order to catch up with and leash the dogs in my presence; not to protect me, of course, rather, to avoid being caught with a park offence. Still, we managed an amiable discourse, almost a banter, as is common with youngsters. They warned me about “wild bulls” up in the ranges and advised me to take off my shirt in the heat. In turn I admonished them to have the dogs well leashed in the view of roving turkey vultures and suggested they look up their doctors immediately for skin cancer treatment. Thus enlightened, we each continued our respective solitary paths.

On and on I climed, ever upwards, until very few oaks were left to provide me with shelter. This forced the eyes downwards, as the head has to be inclined to get some shade on the nose. Mine happens to be purple already without sunburn, so some caution was in order. To my delight, even the humble path revealed unexpected pleasures. Increasingly, it took on a greenish colour, and I bent even further down for a closer investigation. It turned out that I had found a mineral I had read about 35 years ago but hitherto never observed in the Bay Area. It was the somewhat rare SERPENTINE, in Roman days used for making jewels and even building stones, but since then sadly neglected. I happen to know this stone from my childhood in Austria. Not far from my birthplace, there was, and still is, a serpentine mine and an artist is still carving jewels and artifices out of the stones gathered. When polished, they have the appearance and tactile touch of Chinese Jade, but the two minerals are unrelated. 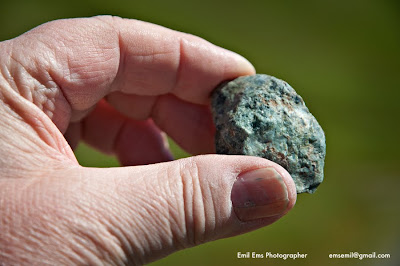 Dear Readers, I see that I am starting to ramble, so I better stop at this stage of the hike and come back to its adventurous finish in my next blog page. THE BEST IS YET TO COME!

As an aside, some of you may have reached the relatively mature age, when details in small pictures are no more readily discernible. Stay calm, help is close by. You just need to double-click on a picture and it appears in the size I had originally configurated it. Give it a try with the picture of the Little Yosemite Fall, you may be in for a surprise! Clicking at the back pointing arrow on top of your web page will bring you back to the blog. Good luck!

Good news for some of my faithful readers who have tried and, sometimes intermittently, failed to enter comments under the blog. After an enlightening dialog with my friendly IT-expert Heidi, the solution has been found and introduced into the blog features. From now on you can enter your comment even without being registered and I sincerely hope that entering problems are now a thing of the past. Please let me know if there are lingering problems.

I just realize that I still have to respond to some of the earlier remarks by Lars and Per, my most faithful readers.
Lars, I am very thankful for the tips concerning the two theaters. I most certainly will book tickets, not only to the Repertory Theater, but also to the other place, especially with your and Per's comments on Shepard. Report back will be made, hopefully with pictures, as soon as I have fulfilled this pledge.