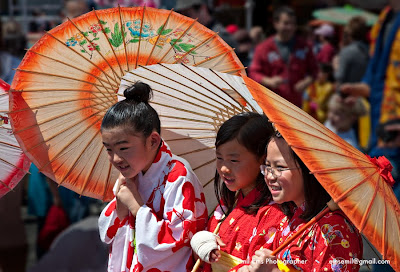 After having read the posting “Japan Town” you may nurse the impression that this exotic part of San Francisco is a well organized and calm oasis in the middle of the town’s hubbub. You may be right most of the year, but there is an occasion, in mid-April, when things get turned upside down and the blocks around Post and Geary Streets sizzle with activity. 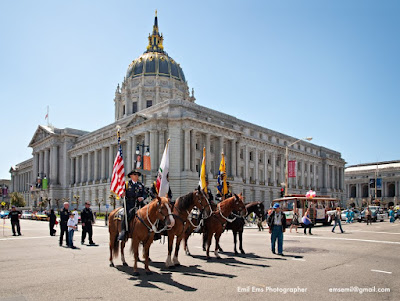 New experiences are the more exciting the more unexpected. Back in April 1977, Alice (my former wife) and myself had an errand – I have forgotten which – in San Francisco and were driving along Polk Street when we suddenly saw a kid dressed in very colorful costume. Ever ready with my camera I jumped out of the car and got a picture before even looking at what I was shooting. It turned out to be a small girl, beautifully dressed in a pink kimono, shyly waving a small sprig with flowers in its tiny hand. Looking around some more, other girls started to appear and I gradually realized that something big might be developing. 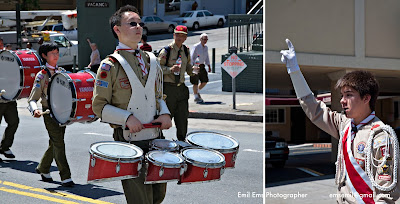 Sure enough, soon sounds of exotic music started to be heard, a group of uniformed police on horseback came jogging along, with flagpoles raised like ancient lances, and the most colorful, stimulating and intriguing parade evolved before our delighted eyes. Groups of kimono clad “Geishas” with gracious steps danced before us, moving like reeds in a gentle breeze, waving sprigs of cherry blossoms in their elegant fingers; robust drummers with fierce miens hammered away at strange looking pommels; a group of youngsters in Chinese costumes did their best to out-drum the former; exotic looking golden shrines where carried by excited worshippers, with barely dressed guardian-priests clinging to the sides: In short, it was a feast for senses thirsting to sample esthetic sophistication. 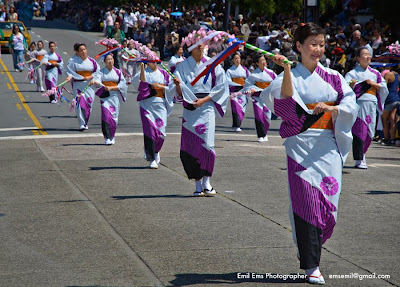 As if that was not all, in the middle of it, suddenly pure beauty started to shine like sun rays glinting from behind dark clouds. Two young women strode majestically on golden and silvery bare feet along the street, one representing the sun, the other the moon, accompanied by a court of flowery pages carrying flags and placards fluttering in the breeze. Shortly behind them a red open carriage brought with it the mayor of San Francisco, poor Mosconi, waving happily to the crowd and not suspecting that this would be among his last appearances in public. To round up the whole event, a small rearguard of veterans from WWII, of Asian complexion, with gilded helmets and just barely firm knees, came marching on as if to safeguard the cultural heritage folded out before them. And all around this an enormous cheering crowd. 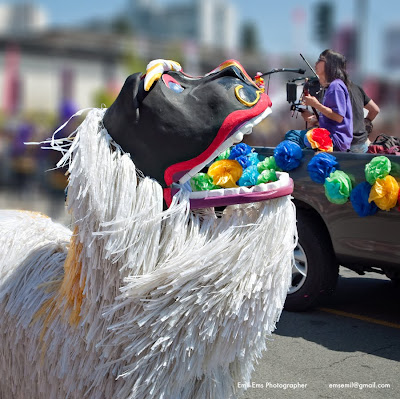 The images I took that day are being cherished even now and many are the friends back home, who shared my excitement about all this, when being shown this marvelous parade, as conserved in slides kept safely locked into a cupboard back home. I also made a print of one of the drummer groups for my brother as a wedding present; it was kept hanging on the wall until its colors were faded, and highly admired all that time. 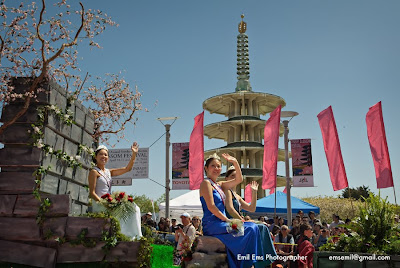 When thinking back at this extraordinary day, I am reminded of the intricate relationship between the Japanese immigrants and their new homeland. There is a large cultural divide between Japan and the US, which leads the immigrants from Nippon to cherish their origin and its culture with a vengeance rarely observed in immigrant groups stemming from Europe. In my view, the efforts spent on this grand parade, the quintessence of the annual Cherry Blossom Festival, are an eloquent sign of this. 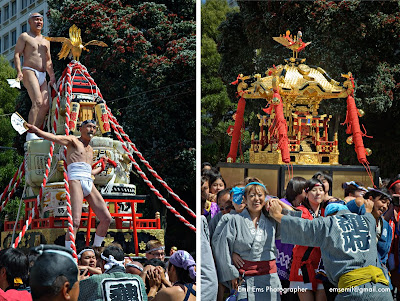 The cultural divide did not originate from, but was certainly deepened during, the more than 200 years that Japan was essentially closed to outside influence. It was due to the US that it opened up again and was able to do so in a peaceful manner, even if the initial impetus was far from peaceful. Commodore Matthew Perry sailed into Tokyo harbor in the mid-1850s with four steamship frigates, armed to the teeth with cannons, and demanded to be granted a meeting with the authorities, carrying a letter from President Fillmore to the Emperor. When he was refused access he started bombarding the harbor facilities until it was finally granted. Still, it took two years of negotiations until a trade and co-operation treaty finally could be signed. Perry was the right man for the job, being a descendent, on his mother’s side, of the fiercest chieftain in Scotland – come to think of it, he has that in common with one of the faithful commentators on this blog. 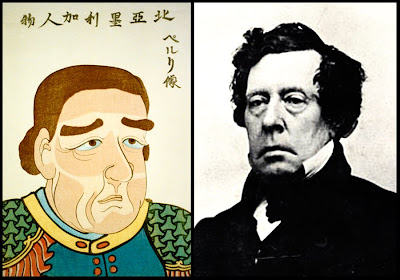 After the opening up, there was a steady immigration trickle over the decades with a sizable Japanese colony first being established in Hawaii and soon after in California. Things went along fine until the 1920s, when the first signs of immigration hurdles were introduced (to diminish, if not ban, immigration from Asia and to prohibit Asian immigrants from buying land in California). But worse was to come, when during WWII, first, Japan attacked the US and, soon after, the US showed a large distrust in its Japanese-descended population on the West Coast by summarily enclosing it in concentration camps. 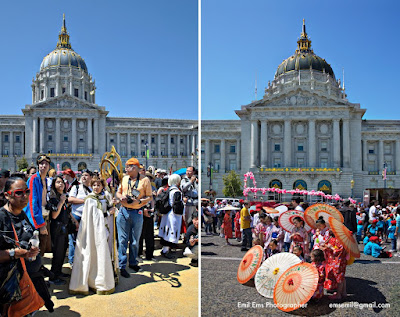 But these events are now long gone and new generations tend to look more into the future than into the past. If looking into the past at all, emphasis is put on the long-run friendship between Japan and the US, underpinning the wellbeing of the Japanese descendents living in the States. Not for nothing, the business centre of Japan Town is called “Japan Town Peace Plaza”, as can be seen in a picture on an earlier posting (“Japan Town”). Notably, there is a round of events being organised all over the US this year to celebrate the 150 years’ jubilee of the arrival of the first official Japanese Delegation ever to the United States, bringing with it the ratified version of the treaty negotiated by Commodore Perry. 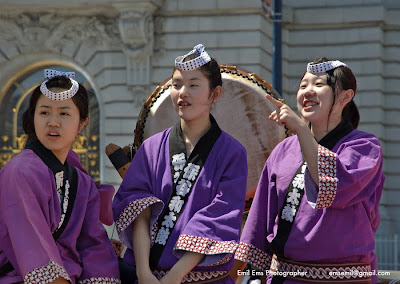 "Oops!", I see to my consternation that this posting is lingering unduly on past history. The thoughts expressed above were intended as a short prologue but have apparently taken up a life of their own. Not any more! Time to go back to traditional blogging. The topic of today is, of course, the grand parade of this year’s Cherry Blossom Festival on 18 April last. 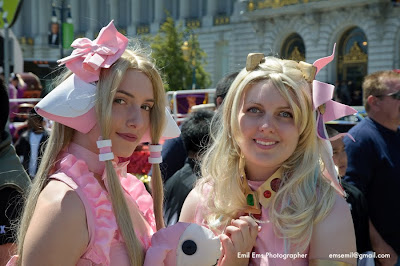 As you can understand, with my brain full of the impressions from 1977, I was curious to learn, first, if my first excitement from that year would be matched by witnessing new wonders, even if, this time, I would not stumble upon the event by happenstance. Secondly, I was looking forward to study how the event itself had developed over the past 33 years and what possible changes could tell us about the integration of Japanese living in California. 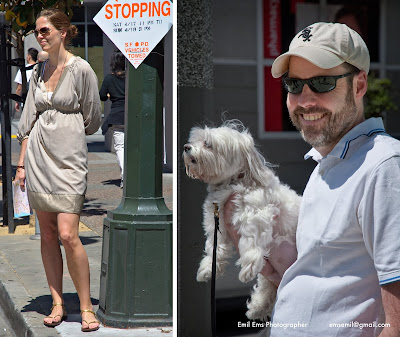 So off I went to San Francisco on another cool and sunny Sunday morning, as made for a parade, and followed the event from its start at the Civic Centre to its finishing strides past Japan Town along Post Street. It turned out that my expectations were more than met. Again I could witness the “cavalry with lances” leading the procession. Ladies dressed in splendid kimonos, in gracious stride and waving like reeds in the wind, with cherry blossoms in their gentle hands, again delighted my palate for exotic beauty. There were drummers aplenty and full orchestras sounding off in Asian rythm. There were ancient “Samurais” swinging their swords over the head of “frightened” audiences. And they all delighted me as much as they had back in the ‘seventies. Apparently, the taste for exotic experiences from Asia remains unsaturated for us Europeans. 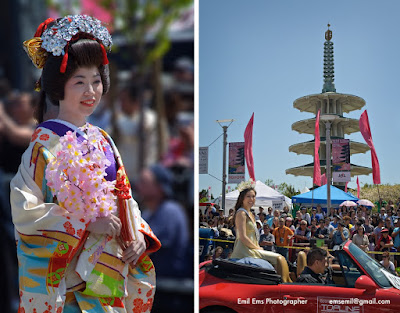 As to the second query, a number of new elements in the parade could be discerned. Foremost, the outstanding tableau, from 1977, picturing the sun, the moon and their entourage, was sorely missed. Apparently, it was the special theme of that year. Instead, there treaded a hurly-burly procession of characters, played by a multitude of youngsters, pretending to be heroes from well known (to the youngsters) Japanese cartoons, the so called “Anime”. This clearly is a sign of the times. Out goes eventually traditional Japanese culture and in comes the new one, no longer exclusively Japanese, but part of a global, more integrated civilization! Interestingly, almost half of the Anime characters were being played by Westerners, an additional sign of increasing integration.

Secondly, interspersed among the traditional female groups, waving like reed in the breeze with cherry blossoms, there were now at least two groups with flowers in their hair and around their neck, dancing sensuous hip gyrations. It appears that Hawaiian Hula dancing is getting mighty popular, both in Japan and in California, and has also been infused into the broadened, more global Japanese culture. This mirrors the earlier remarks on Japanese immigration as initially being directed towards Hawaii. That state still holds the largest Japanese community after California. 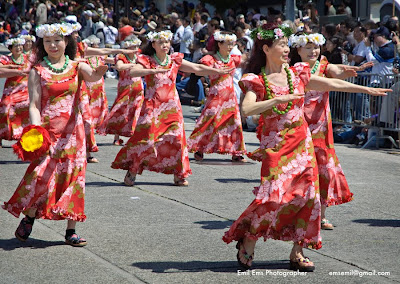 Thirdly, this time a prominent role in the parade was played by two or more integrated schools, where pupils are being taught in Japanese, be they of Western or Japanese origin. It was charming indeed to see children of all races dressed like the traditional Japanese female dancers and, like them, waving like reed in the breeze with fans in their tiny hands, smiling the toothless smiles of small kids having a marvelous time. Not to be bested, one or the other, more portly, adult Westerner also attempted to mingle among the Japanese beauties, doing her utmost to emulate traditional Asian graciousness. Seeing all this indeed helps us believe, that there may be a future for our disparate world after all! 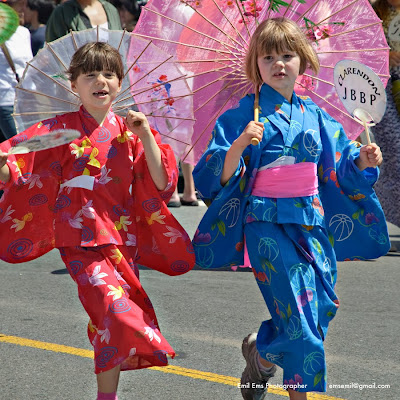 To sum up, it was another marvelous day in my voyage down memory lane, which more and more appears far too short to take it all in, in this California that seems to take the whole world in its embrace. 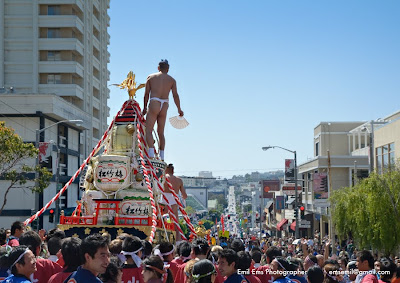 As an aside, do I understand it right that you would like to have a good look at all my pictures from the Grand Parade, presented with better quality and in the form of a slide show on your screen? If so, your wish is my command. If you go to the web-address below and, once there,
click on the word “Slide show” up to the left, your wishes will come true!
http://picasaweb.google.com/emsemil/CherryBlossomFestival?authkey=Gv1sRgCI_OqYqchcSfugE# 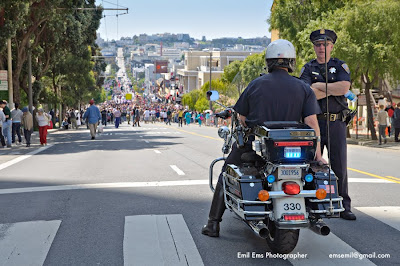