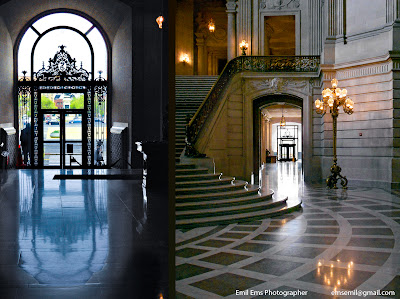 For quite some time now I have been content to let the blog deal with Berkeley, and focus on matters of smaller and smaller dimension. I trust you agree with me that it is time for a break. Let's look at grander schemes for once and let's move across the Bay.

San Francisco is among the younger great cities in the US. You know which is the oldest, still on-going, city founded by Westerners, don't you? In case you hesitate, let me tell you that it is St. Augustine (Florida), founded in 1565. Many people believe it to be Santa Fé, but that city is only the oldest State Capital. Interestingly, Santa Fé could as easily be named San Francisco as Frisco itself, since its full name is La Villa Real de la Santa Fé de San Francisco de Asis!

Now back to San Francisco: as already its name indicates, it too was founded by the Spaniards, way back in 1776, as the Mission and Presidio San Francisco de Asis. It essentially remained a small, contented, settlement, as first the Mexicans and then the US took possession, and it may have remained so, had the Gold Rush not occurred. That turmoil, succeeded by a silver rush and the arrival of the Pacific Railroad, turned this quiet corner of the West almost overnight into a mighty metropole. 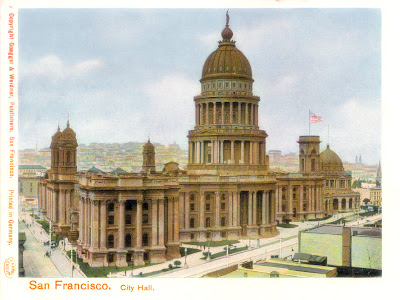 A sure sign of the boisterousness of this turnaround was the megalomaniac building frenzy creating that intriguing city. As an example, construction of a mighty City Hall started in the second half of the 1800s; after 27 years of labour, the Hall opened finally in 1899. It surely must have been the largest building in the world in those pre-Pentagon days! Its potent cupola was intentionally designed to outpace the one of the Capitol in Washington DC. Visitors stood stupefied at the view of this colossal city administration.

Alas, how are the mighty fallen! Barely seven years after the building stood ready, in its virginal glory, the great earthquake of 1906 put an early end to it! As the smoke after the succeeding holókaustos cleared, just the smoking barebones of the hybristic monument remained. And not only this once mighty building, the whole of San Francisco lay in smoking ruins! 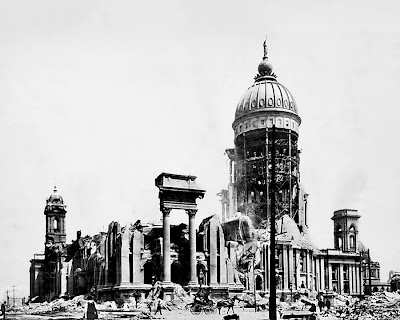 Occupants of a normal city may have given up hope at that stage and moved their residence elsewhere. In fact, some did, and the rise of Oakland on the opposite part of the Bay bears witness to such moves. In spite of this San Francisco, in a spirit of utmost indefatigability, reshaped itself in record time, in a great rush of renewed building frenzy. After a short period of only nine years, the city's administrative and commercial centers were standing again, proud and shining, to welcome the great Pacific Exposition of 1915. As an example, the City Hall was rebuilt within the record time of only two years and finished in time for the Exposition. 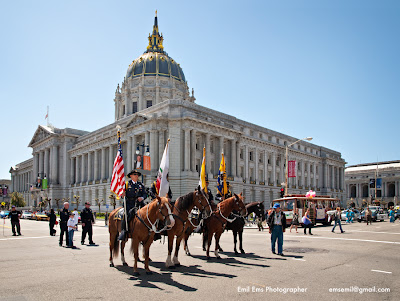 This time around, it was decided to give the building more harmonious proportions, in line with the neo-classic design ambitions of the Californian "Gründerzeit". You may recall that this was the time, when most of the traditional buildings of the UCB Campus were being designed and built (The Jewel in the Crown). The Architect was Arthur Brown, a graduate of the Ecole des Beaux Arts in Paris, just like Julia Morgan. As a result, the building is smaller than the original one, even if it still ranges over two city blocks, and the builders have kept the ambition to have its cupola outpace that of the Capitol in Washington DC.

Will the new building be prepared to withstand major earthquakes, in contrast to its predecessors? Unfortunately, Arthur was no Julia and lacked her keen engineering sense of "building to last". The Loma Prieta Earthquake of 1989, although considerably milder than the one of 1906, still did considerable damage to the City Hall. The dome turned 10 cm like the cap of a soft drink bottle and there were damages to the main building supports.

As a sign of the true pioneer spirit of America, still in existence in any time of need, a grand solution was found to isolate the building against future earthquake damages. The whole complex was separated from its foundations, sawing through the walls so to speak, and lifted up a meter or two. Thereupon, a great number of huge steel reinforced "rubber balls" were forced into the gap, leaving the building to rest on them. The idea behind is that the wave undulations caused by the earthquake would be dampened, if not obliterated, by the rubber balls, keeping the main building more or less isolated from the quake.

Impressive as it may be, the building completely escaped my attention during my early student days in Berkeley. Youth strives for adventures and happenings, rather than the patient contemplation of building plans and edifices. But two years ago I had finally matured enough to become interested in this quite remarkable building. This was when I attended the annual Cherry Blossom Festival in the town, which is starting off straight in the front of the main entrance. After an admiring glance at its wall of columns, superseded by the cupola of cupolas, glittering in the sun with its bands of golden stripes, I promised myself to take a closer look at this the most impressive among all city halls at my earliest convenience. Alas, this promise was sorely forgotten, but it resurfaced at the present visit to California, so within the second week of my stay, I decided to pay it a visit. 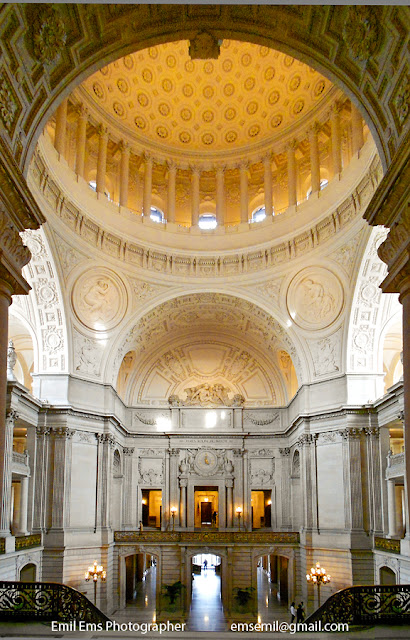 When striding through the main entrance, I was surprised by the ease and informality of access. A friendly lady at the information desk asked me to go through the, nowadays prevalent, screening frame but, otherwise, I was completely left to my own devices. Not only that, I was also more or less the only one standing in the main hall and admiring the surroundings. Compare that with the company of hundreds and hundreds of tourists crowding you if you dare enter the Capitol Building in Washington DC.

The large picture above was taken on the top of the broad staircase that leads the visitor up to the main floor and the Chamber of Supervisors. You can see a glimpse of the stairs going up in the title picture. More importantly, follow my eyes to have a look at the middle opening on the first floor opposite to where I am standing. Within it you can glimpse the door to the mayor's office and, with a bit of imagination, believe to hear the thunder of a revolver being shot at poor George Moscone, who was killed by Supervisor White precisely there back in 1978, soon to be followed by poor Harvey Milk. On a more positive note, Marilyn Monroe was married there to Joe DiMaggio in 1954. 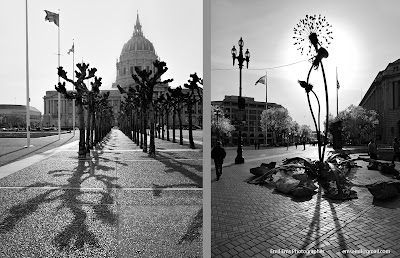 A lot could be said about City Hall's splendor, but I leave it to you to discover, first hand, what a marvelous building this is. Let's instead exit the Hall at the main entrance and take a stroll toward BART from there. There are two Plazas here to await our attention. The first, adjacent to the City Hall, is called Civic Center Plaza. It is a bit peculiar. Comprising a huge space of fully two city blocks, it looks curiously empty and waiting to be filled with imaginative landscaping. I am sure that Fredrick Law Olmsted could have made a spectacular park out of this expanse if he would have been engaged to that effect. Instead, the Plaza seems to have been left as prey to the City Fathers' fancy at any given time period. At present, it looks to me like a large exercise field for the army, with trees aligned in the middle of it like rows of a platoon standing at attention to be inspected!

In contrast, the UN Plaza, which is considerably smaller in size, is kept more enticing and intriguing by a series of monuments and fountains, some serious, some funky (see picture above right) but all cooperating in keeping the visitor, sauntering about, engaged and in a good mood. 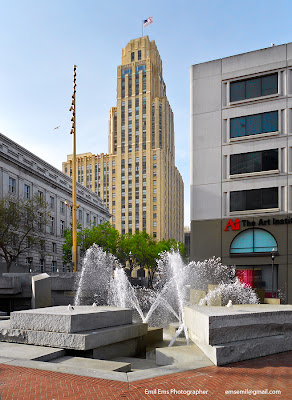 You may well ask why that space is called UN Plaza. In fact, the UN Charter was signed in San Francisco, back in 1945, albeit not on that precise spot. The proper locality is the War Memorial Opera House, which lies on the other side of the City Hall, quite some distance away. The Opera House is also the locality for another historic event; the Treaty of San Francisco was signed there in 1951, officially ending the Second World War.

Proceeding along UN Plaza, we soon arrive towards its end, where a last fountain beckons towards Market Street and the city hubbub beyond. To see what I mean, place yourself on the other side of the fountain in the picture above. Looking towards the fountain, you will see a peaceful scene, with sea gulls – or are they pigeons – enjoying the pearly spray. 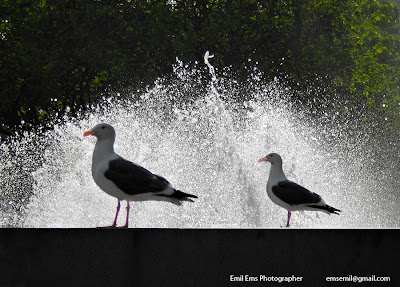 Turning your back to the fountain, you may be surprised by the abrupt change of scenery. Vagrrants share the benches with the same gulls/pigeons and in the distance you glimpse the destitute parts of Market Street, far south of the commercial center's urban elegance and hoping for better times! 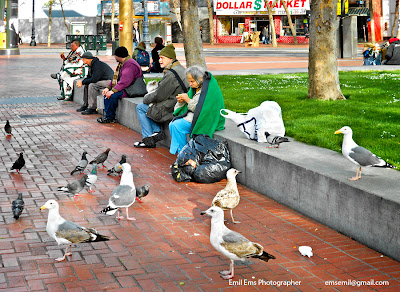 Beautiful photos!
What I like even more is your narration around them, really entertaining!
Have you ever thought of writing poems? ;)

Very interesting. Even though I have been to those places in San Francisco many times you have given me a new perspective. Thanks. Jerr

Dear Emil,
My sister is perusing Fiat Lux! even as I write this. Admiring your work- as everyone does.
These latest photos of SF are masterly- as usual!

Hope all is well with you on the Continent.

Your reflections and reports illuminate new aspects, educate, inspire and surprise, all at the same time. Good!

Studying 19th and early 20th century architecture in the US fascinates as a part of society and nation building, which today to some part is mirrored in the EU and attempts to construct an EU-mindset via the Brussels buildings. But what mindset?

An important part of nation building/branding in the US was also the railway stations and later airports. Would be fun to read something around these buildings as your journey continues.

Dear all,
Thank you kindly for your positive comments, which encourage me to continue working on my blogs!

Björn, this is an excellent suggestion, to start blogging about railway stations (not sure about airports though)! Unfortunately, this has to await my next visit to the US, since I seem to have outstayed my welcome already.