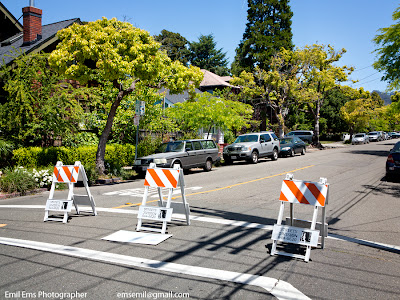 Time to get our attention back down to Earth from the lofty cupolas. But this time, we are not gazing at flowers, at least not directly: rather, people, in their most neighborly activity, is what we will be studying.

The cosy neighbors of Stuart Street, organized in SNAP, arrange a street party twice a year or more, called a "Potluck". For us Europeans, this means you bring your own food and drink and have a ball around a large common table. The place for this event is the street segment just above the signs you see in the above picture, the barrier fending off any unwelcome motorists who might interfere in the general fun. 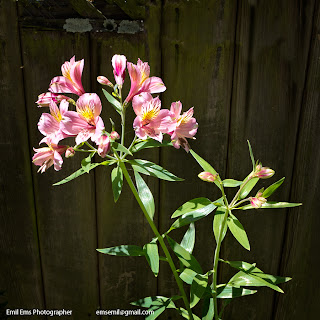 I had heard this party mentioned some time ago, but it had slipped my mind until, Saturday last, I got the feeling in the morning of having missed something important. Sure enough, soon I got an e-mail from Mugur, Karl's partner, that a potluck was in preparation. Off I rushed, grabbing a bottle of wine on my way out, eager not to miss the fun. Karl was just about to put the above signs on the street, blocking off the second segment of Stuart Street between Fulton and Ellsworth. 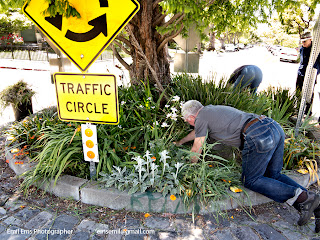 No sign of a party yet, but, further up the street I could glimpse some activities on the roundabout at Ellsworth. It turned out that the good neighbors of Stuart had found it fruitful to start the event by doing a bit of gardening on the flowerbeds there. This gave me a sudden flash-back to the co-operative on Myrstuguberget in Huddinge, where I used to own a small house, and where all of us partners used to clean the commons twice a year.

It was heart-warming to see how, even in this the most individualistic country of them all, there was a vivid community spirit expressing itself in the neighborhood. 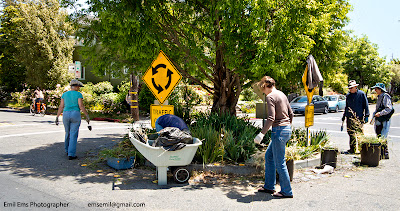 Whilst this was going on, other participants started to put tables and chairs on the street, under the warm sunshine of a Californian morning. I was a bit ashamed of having brought only wine, but this did not prevent me from savoring all the delicious food being served smack on the street and having a good time, whilst observing the local mores. 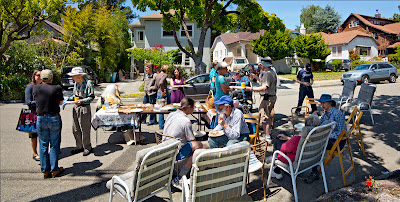 In contrast to us Swedes (counting even myself among this tacit crowd) the Stuart residents are a mighty talkative bunch. During the meal, the latest news were being traded and an easy sense of comradeship reigned over this small enclave. With the food and drink all finished, and when us Swedes would tend to leave for home, the real fun began with a great round of story telling and joke rendering, to the great amusement of all of us. But why spill unnecessary words on this; better let the pictures below do the telling. But, dear readers, stay tuned; there is more text to come after those pictures! 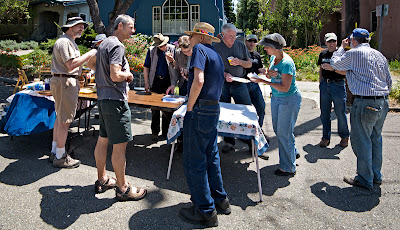 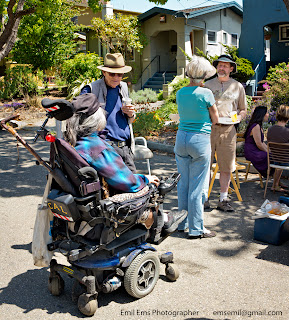 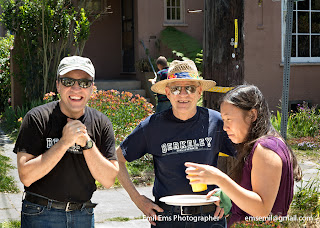 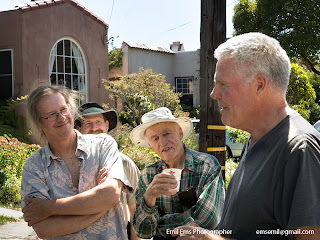 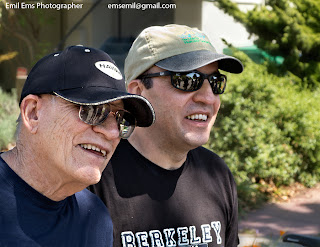 Thank you, dear readers, for staying with me on the blog post. I would now like to take the occasion to present to you two Master Gardeners that happen to live opposite each other on that special stretch of Stuart Street where we are having the Potluck. Both have earned rewards from the City for their innovative and sustainable street gardens. The Gentleman below is Wilbur Hoff who, together with his partner Kris, keeps a wonderland of many flowered buds in front of his house. The small marvels are native plants, who are economical, if not to say parsimonious in their use of water. You see him standing in his backyard, who is no less colorful than the front.

Not to be bested by his friend and close neighbor, the Gentleman below has chosen quite a different route towards sustainable gardening. Karl Reeh, already well known to you from earlier blog posts, has, together with his late partner Jerry Rodgers built up what I only can describe as a kind of South-East Asian jungle, with bamboo trees, banana trees and all, and so densely cultivated that his house can  hardly be seen within this green overwhelmingness.


I am lifting my cap to these two floriculturists. But the story would not be complete without recalling a third Magnus of all things flowery:  Rudi Schmid, Professor in Botany, retired from UCB and editor of a prominent journal in the field. You have met him already in an earlier blog post (Lofty Parks). Between the three of them, you would be hard put to get a question about gardening and the flowers therein unanswered, let me assure you!