THE IMPORTANCE OF TENDING TO SIDEWALKS 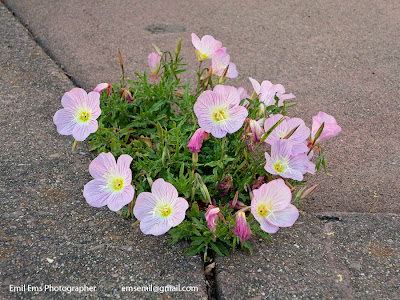 Aging leads sometimes to surprising insights. Only two years ago, when visiting Berkeley last, I felt like a great adventurer, roaming widely over the East Bay, searching out experience after experience, never tiring of exploring new localities. This time around, it seems as if the brain has decided to slow down the pace. I do not feel that great urge anymore to venture forth into new terrain; instead, I am enjoying a daily ambling walk along the cosy little streets of South Berkeley, returning, more or less, to the same streets over and over again. 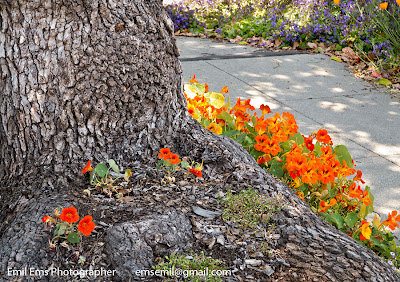 You may well ask yourself this: what is the special charm of those streets that entices your blogger to endless explorations? There is no easy answer to this, but I will make an effort nonetheless, since the answer has a bearing, more in general, on what makes a city street pleasurable to walk along. The future of the US may well depend on a good answer, since the ever increasing cost of petrol could bring about a change in people's behavior. At present, if I understand the mentality of the people around here right, you take the car as soon as the distance to cover extends to more than half a kilometer (a quarter of a mile). For me, this is just a short stroll before breakfast, to get an appetite so to speak. The more people start to walk, the more they will appreciate – and request – a pleasurable walking environment. 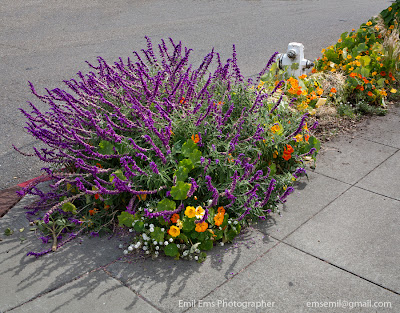 So what is the answer to the above riddle? I think it is best given by looking at some pictures. Consider the two views below. They have been taken last week, whilst standing on the corner of Stuart and Ellsworth Streets in South Berkeley. The left view shows Stuart Street going west; the right one Ellsworth Street going north. Now I ask you, which one would you rather use as your favorite ambling route? To get a better look, please double click on the pictures. Isn't the answer obvious? And isn't that an important message for city planners?

It took me five visits to South Berkeley, in 1976/77, 1980, 1981, 2010 and the present stay, to consciously figure out the difference. Whenever I am in town, I tend to navigate towards Campus around noon. Although Ellsworth Street would be the obvious route to take, I have always subconsciously avoided it, instead mounting Stuart Street all the way to Telegraph Avenue and taking it from there. Never imagined that there was a reason for the deviation.

The flash of enlightenment came in a conversation with Karl, my omniscient source of information about all things connected to South Berkeley. He pointed out to me that the City of Berkeley had a special régime concerning the stretch of residential side walks facing the street. The City undertakes to planting trees there, but leaves the fringe between the trees unpaved, trusting the residents in the houses located along that fringe to do their neighborly duty. 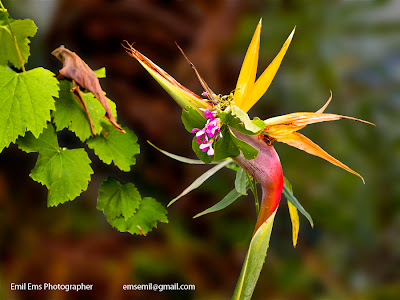 Of course, not all residents have the sense of civic responsibility to tend to this fringe. Some simply pave it over, others just let the grass grow as it pleases. But there exist oases of cosy neighborhoods, where the residents really care for their stretches. Two blocks of Stuart Street appear to contain an abundance of such neighbors. The result is astounding! Ambling in those blocks is, by turns, like visiting a botanical garden, entering a tunnel of greenery, now accosting a bamboo jungle, now ... The variation is seemingly endless and the untended or paved over stretches are far between.

I find especially pleasing those parts of the sidewalk, where residents consider it as an extension of their front garden, and make a conscious choice of landscaping the whole ensemble in a pleasing composite. Let me show how two neighbors, opposite each other, have found different, but equally pleasing, solutions to this challenge. 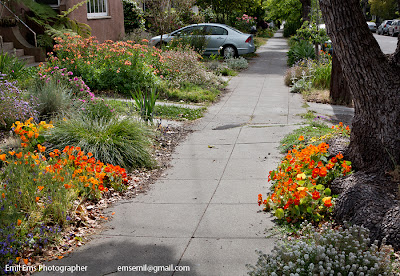 The above example shows the mirroring approach, with the fringe matching – flower by flower – the front garden. This creates the illusion of walking on a path within a larger botanical garden, very pleasing to the eye. The example below shows how the resident on the opposite side, having remade his front garden effectively into a jungle of bamboos and similar vegetation, continues his creative build-up by shaping a kind of vertical garden on the sidewalk's fringe, constantly increasing the size of the mound by adding new planting material. Only the growl of the tiger is missing in this illusion of South East Asian greenery! We amble in admiration among these many facetted signs of gardening creativity! 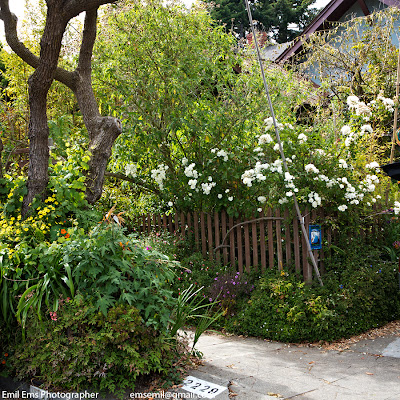 Hi Emil,
Nice meditation on the small beautiful things in life. The ancient sages of the East believed God was in everything, from the tiniest particles to the outermost reaches of the galaxies and beyond - all within the one cosmic mind. Sarvam Hyetad Brahama (Everything is the manifestation of God). Go figure. :-)
Best regards,
Thorsteinn

Thanks, Emil, for helping us get a new perspective on the value of extending the garden across the sidewalk and up to eye level. We both read your blog and looked at the pictures. I think we will walk our Berkeley neighborhoods and elsewhere with greater awareness of the civic implications of gardeners' choices.

We have both enjoyed our chance conversations with you and hope to stay connected with you through your blog.
Best wishes for a good journey home replete with many memories, and more pictures and reflections to share.

Thank you for your lovely pics.
Glad Pingst from Ylva

Emil,
You have in your recent blog given us a wonderfully pedestrian perspective on your neighbourhood.
You help us
"To see a world in a grain of sand,
And a heaven in a wild flower,
Hold infinity in the palm of our hand,
And eternity in an hour."
"Verweile doch! ..."

What more can one want? Many thanks for your sights and insights,