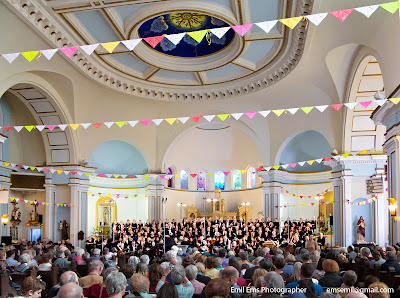 I feel there is need for some rest from the lofty themes, so permit me to sneak in a topic from the lower Berkeley ranges for a change. This does not mean that the intermission be lowly. Far from it! This blog is about a great choir and orchestra that drew me out from a temporary melancholic lethargy and made me whole again.

In fact, this is the second time I am blessed with a choir performance during my various stays in Berkeley. You may recall my enthusiastic response to the performance of the San Francisco Symphony Chorus two years ago ("Heavenly Choir"). Now it was time to listen to its East Bay Counterpart, the Berkeley Community Chorus and Orchestra. It is difficult to judge which of them is the more impressive, so don't let us be drawn into a discussion about this. Suffice it to say that both are grandiose. It is a miracle indeed to witness their performance at full blast, when 144 souls (in San Francisco) or more than two hundred (in Berkeley) open their golden throats and let mellow tones fill the universe.

The Berkeley event I am hinting at was a performance, last Sunday, of Antonin Dvorak's famous Requiem, with full orchestra, four eminent vocal soloists and, last but not least, the magnificent full bodied Berkeley Chorus. For those not familiar with Antonin's piece, its demanding orchestration and chorusation hardly leads itself to be played at funeral masses. Let's face it, this is a concert piece, if ever there was one. That notwithstanding, at least part of it was played at President Havel's funeral mass. It is said that some Member of the audience questioned whether the lover of Velvet Underground and Rolling Stones would have wanted the soaring grandeur of this Requiem at his funeral. He surely must be mistaken. Not only was Vaclav a true Czech and would not dream of putting aside Antonin, the createst Czech (actually Bohemian) musician of them all. In addition, Vaclav, as anyone else the least familiar with Antonin, would certainly have recalled the important role the composer played in advancing modern music American style.

I was lucky to get to know about this performance in time and have again to thank Karl Reeh for that. One of his garden friends is a Chorus Member who encouraged us to witness this extraordinary performance and Karl was kind enough to take me along in his car. The venue for the event was the large Catholic church of St. Joseph on Addison Street. With its lightly colored interior and aptly vaulted ceiling, not to forget the beautiful glass windows above the altar, it appeared as an appropriate counterpoint to the music. In a way, it reminded us about a rosy late sunshine sky, not unlike those painted by Caspar David Friedrich; against such a romantic background, the wrath of God on Dies Irae would appear the more frightening. And forceful and frightening indeed was the first half of the performance. The full blast of the Chorus sounded like God's Thunder powering down at us with a force that seemed to shake the very fundaments of the church. Thankfully, Antonin's score provided for an intermission, which we put to good use for cleansing body (with coffee) and soul after this onslaught of sounds.

The second part of the performance went in a calmer, more lyrical vain, which helped us come to terms with the inevitable end of our existence, and left us cushioned in God's Mercy rather than defenseless under God's Wrath.

What an afternoon, never to be forgotten!
Posted by Emil Ems at 03:27

We too were powerfully moved by this concert. Thanks for writing about it so aptly. Kris