THE JEWEL IN THE CROWN 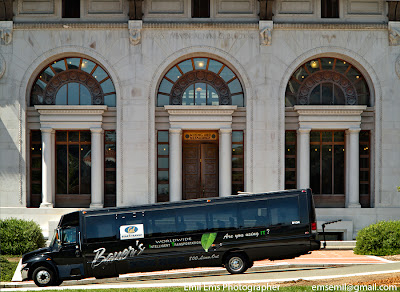 The University at Berkeley never ceases to amaze me. You may wonder what comes next; but bear with me, it takes some warming up to arrive at the topic of today.

Three weeks ago, I received some visitors from back home in Austria. They were the more welcome since they were from Knittelfeld, hometown of my dear godmother Steffi. Last year, I was on a seven days' pilgrimage, starting from my birthplace, to see her. To my dismay, she was in bad health already then and has since passed away. The visitors came to participate in the Big Sur Marathon and combine this with a sight-seeing tour in the Southwest. Concentrated as I am on Berkeley and its wonders, I enticed them to take a hike around Campus with me. Here they are, sitting on the stairs leading up to the Campanile.

When ambling upwards (eastwards) on Campus, I usually take a southern route, since I have a particular fondness for the wilder parts of UCB, which are found along South Fork of Strawberry Creek. But with the guests in tow, I chose to go more northward on this guided tour, along Memorial Glade and upwards from there. Suddenly, we arrived at a place that I never had bothered to look at closely, usually rushing by on my way elsewhere. This was a small glade called Mining Circle. There is an elevation in the middle of this circular place, overgrown with grass. We happened to mount it and found, to our great surprise, that there was a pond on its crest, impossible to see from below. And – lo and behold! – the most enticing building was greeting us from opposite the puddle, mirrored splendidly in the water, which was only slightly disturbed by a light breeze.

It turned out the we had stumbled on the Hearst Memorial Mining Building, dedicated to the father of Randolph Hearst, who was a successful entrepreneur in the gold and silver mining business. We briefly entered the building and were as enchanted by its interior as by the building's reflection. Since that memorable discovery I have spent some time researching and documenting the building and it turns out that it has some interesting facts to tell us. 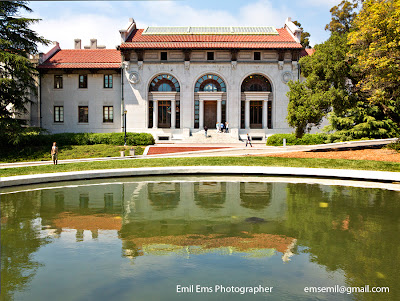 What looks like a beautiful, albeit relatively small marvel of a building, is in fact the very first edifice erected within the Original Campus Master Plan for the University. This grand name is grand for a reason. Towards the end of the 1800s a new competitor was emerging on the Peninsula, Stanford. The promoters of Berkeley saw with distress that widow Stanford was financing architectural masterpiece after architectural masterpiece in Palo Alto, whereas Berkeley only had South and North Hall to show for it.

This irked especially another immensely rich widow, Phoebe Hearst, the mother of Randolph Hearst. In a remarkable act of female one-upmanship she financed an international architect competition to design the University's future architectural embellishments. This competition was held in Antwerp in Belgium in 1898 and won by architect Emile Bénard.

This gentleman, being French, refused to come to California and implement his plan, but a formidable replacement was found in architect John Galen Howard. He held the position of Supervising Architect of the Master Plan and kept it until his death in 1931 at the age of 67. Under his stewardship all the beautiful buildings in white stone (in classical revival style) adorning Campus were put up. To mention a few: the University Library, the Campanile, Wheeler Hall, Sather Gate, all financed out of the wealthy widow's burse.

I dearly would like to be transported back to the mid-thirties, to benefit from the marvelous and lofty views that Campus provided in those days. After Galen's (and Phoebe's) death, this prosperous architectural period came to an end. Phoebe's son, Randolph Hearst, kept on financing the odd building after that, but soon redirected his interests towards San Simeon.

The building activities after Berkeley's golden age are a sad story. The 'fifties and 'sixties saw a rapid expansion of edifices, every new one uglier than its predecessor; as a result, Campus is nowadays presenting itself to the world as an architectural cacophony, where one has to make an effort looking sideways more often than not, to neglect the bad whilst still appreciating the good. Don't misunderstand me now: UCB is still a marvelous place to visit, even if I am deploring the loss of opportunities to make it a marvel of harmonized architecture. The more to applaud that some of the worst offenders, for example this one just opposite the Mining Hall, are about to be torn down, hopefully to be replaced by buildings more in line with the Grand Master Plan and agreeable to the eye. 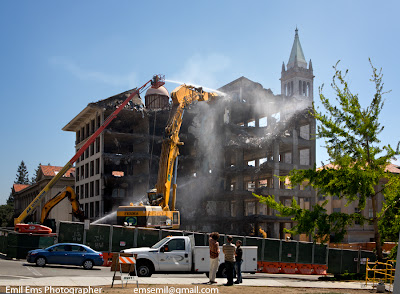 I see that you are getting impatient and longing for a return to today's topic. Not to worry, from now on this post is concentrating on Mining Hall. As I said above, this was the first building by Galen within the Master Plan. This is somewhat amazing, when comparing its style with that of Galen's other buildings, built thereafter. The first one looks distinctly more modern than the latter ones! Even if it has six Dorian columns incorporated into the facade. the remainder looks distinctly Art Nouveau. How could this be? A possible answer is that Galen used a valiant young assistant in the design of the building, trusting her with drawing the facade's accoutrements as well as the structure of the main hall. Who was this enterprising young architect? None else but Julia Morgan, whom we have met already (see "Female Endurance").

We can imagine that Julia, fresh from having received her diploma in Paris, was eager to demonstrate what she had learned abroad. Not only that, she probably was at the peak of her youthful creativity! Have a look at the formidable interior of Mining Building's main hall below. Isn't it a shame that earthquake risks forced Julia to discard with the Iron Pillar Technique applied by her Art Nouveau contemporaries in Europe and instead become the foremost pioneer of reinforced concrete in California? Had she stayed in Europe, she certainly, in my view, could have designed Master Houses at par with those of Victor Horta, the foremost of our Art Nouveauists! 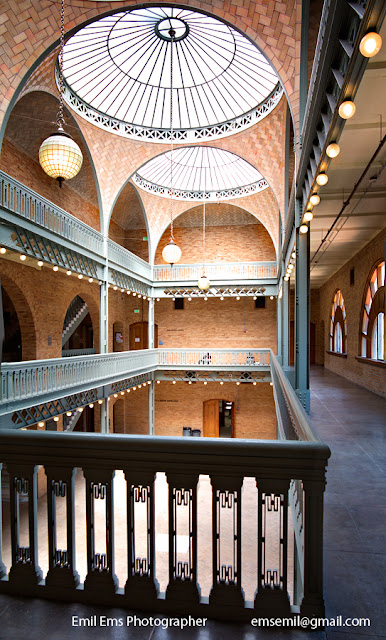 Unfortunately, this was not to be. Concrete as building material does not lend itself to the type of slender, almost ephemeral houses that Art Nouveau at its best could give birth to. On the other hand, what is lost in delicacy is gained in sustainability and for a building to be able to survive even severe earthquakes, whilst still exhibiting architectural aesthetics, must be counted as a formidable achievement by this among the greatest of California's architects. 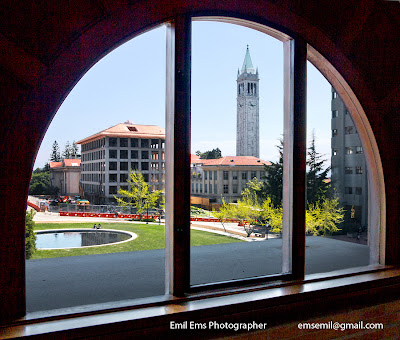 Don't feel bad that you "missed" the pond earlier for, I do believe, that it did not exist! Last time I passed that way it was covered in construction shanties. Glad you found the Mining building though. Your photos do it proud.